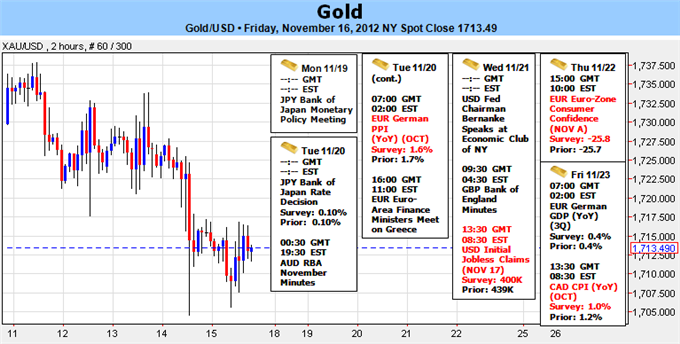 Gold prices are softer at the close of the week with the precious metal off by more than 1% at the close on Friday. Bullion closed above the weekly low made on Thursday as equity markets continued to sell-off amid ongoing uncertainty with regards to the looming fiscal cliff in the US and deteriorating conditions in Europe. Data out of the euro area this week showed GDP contracting for a second consecutive quarter, confirming a technical recession with European equity indices broadly off by 2-3% across the board. The recent risk sell-off saw demand for gold wane with the yellow metal trading at $1713 at the closing bell in New York.

Minutes from the latest FOMC policy meeting were released on Wednesday with the report citing that a, "number of participants indicated that additional asset purchases would likely be appropriate next year after the conclusion of the maturity extension program in order achieves a substantial improvement in the labor market." The language suggests that the Fed's expectations for domestic growth remain tempered with the minutes also showing a greater interest in further altering the central bank's transmission mechanism by way of setting clear targets for inflation and unemployment. The hope is that such measures would increase transparency as market participants gauge prospects for future monetary policy. The Fed's growing willingness to further expand its asset purchases should keep gold prices well supported as investors seek to hedge against inflationary pressures amid continued expansion in the monetary base. So why was the precious metal under pressure this week?

The recent strength of the US dollar has continued to limit gold advances over the past week with the reserve currency climbing to near three-month highs. Declines in broader risk assets also weighed on gold prices with the S&P closing its second consecutive weekly decline while the Dow and the NASDAQ marked their 4th and 6th weekly losses respectively. As we've previously noted in these report, the inverse correlation with broader risk assets, often attributed with the "risk on/off" trade, has decoupled with gold continuing to tracking risk.

Investors focus has remained fixated on the fiscal cliff debate, the rising risk of conflict in the Middle East and developments coming out of the Eurozone with gold traders taking cues off these headlines. Prices are likely to remain rather well supported in the near-term as the market's patience with policy makers dwindles. In the event congress does strike a deal to avert the fiscal cliff, bullion may come under some pressure as demand wanes with our broader bias remaining weighted to the topside so long key support at the $1693 pivot level is respected.

From a technical standpoint, gold remains within the confines of a descending channel formation dating back to the 2012 high made in October. Near-term support is seen at the 23.6% retracement taken from the October decline at $1702 and is backed by the 61.8% Fibonacci extension taken from the December and May lows at $1693. This level has served as a clear pivot in price action going back to 2011 and is likely to prompt a reaction should prices remain under pressure. A break below $1693 invalidates our near-term bias with such a scenario risking declines back into the monthly low at $1673. With gold making its low on the third day of the month, opening range strategies suggest that we are likely to close the month near the highs with a breach above interim resistance at the 38.2% retracement at $1720 eyeing critical resistance at the 78.6% extension at $1738. Again this level represents a key pivot for bullion with a breach above exposing our primary objective at the 61.8% retracement at $1750. Note that daily RSI has now broken below the 50-mark with a move below the 40-threshold suggesting that the near-term correction may yet have deeper to run. -MB