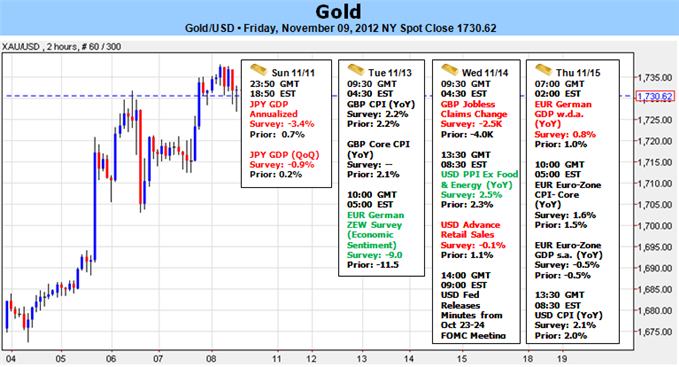 Gold prices are markedly higher at the close of the week with the precious metal advancing 3.2% to trade at $1732 at the close of trade in New York on Friday. The advance marks the largest weekly gain since the week ending August 24th with the move paring nearly half of the declines seen from the October highs at $1796. Bullion found support just ahead of the May highs at $1671 with the spot price settling just below key near-term resistance at the $1738.

Economic data this week out of the world's largest economy continued to out-perform with trade balance data, initial jobless claims, wholesale inventories and consumer confidence all topping consensus estimates. November University of Michigan consumer confidence data released on Friday surged to levels not seen since August of 2007 at 84.9, up from 82.6 in October. Recently, stronger-than-expected US metrics have weighed on gold prices on expectations the Federal Reserve may begin to normalize monetary policy, thereby alleviating concerns over rising inflation. So what explains the sharp rally seen in gold this week?

It important to note that gold correlations have continued to break down with the yellow metal moving in lockstep with broader risk assets at times only to simply reverse losses to close higher on the session. Recent price behavior has been very telling this week in that although stronger US economic data is likely to curb additional easing measures from the Fed (typically bearish for gold), the sharp declines in equity markets have unnerved investors offering gold support despite strength in the greenback and subdued inflationary concerns. In light of these observations, the recent pullback in equities has 'correction' spelled all over it with investors starting to position for a near-term pullback of magnitude in broader risk assets. As such, bullion is likely to remain well supported in the near-term, with the $1693 level (Noted multiple times over the past 4 weeks) remaining a key pivot in price action.

Looking ahead to next week, gold traders will be taking cues off minutes from the latest FOMC rate decision and inflation data out of the US. CPI is expected to rise to an annualized rate of 2.1% in October, up from 2.0% a month earlier. Should the report show an unexpected acceleration in the pace of price growth, look for bullion to challenge the monthly high at $1739 as increased demand for hedges against inflationary pressures prop up the gold trade. Likewise, the FOMC minutes may shed some light on central bank’s stance as investors attempt to gauge the Fed’s appetite for stimulus.

From a technical standpoint, the broader correction may yet see another leg lower with key near-term resistance seen at the 23.6% Fibonacci extension taken from the May and November lows at $1737. Although we hold a neutral stance at these levels (after triggering limits at $1735), our long-term outlook remains weighted to the topside so long as the $1673 low is respected with a break below this mark risking losses to the 200-day moving average at $1663 and the $1630. Look for a near-term pullback to offer favorable entries between $1700-$1720 with a breach of the highs targeting the 61.8% retracement taken from the October decline at $1750 and the 38.2% extension at $1775. Note that a daily RSI break above the 60-threshold offers further conviction on our directional bias. –MB