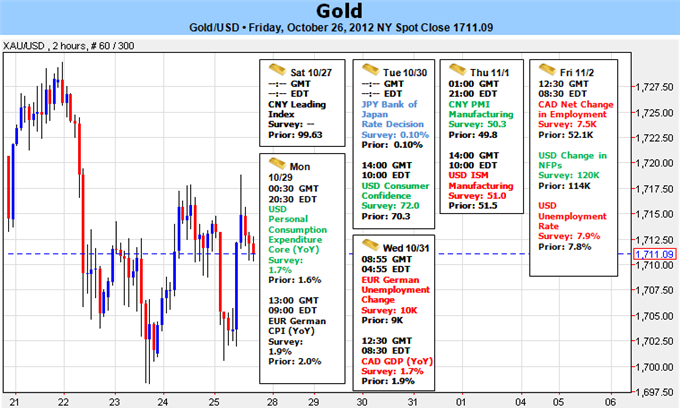 Gold prices continued to ease this week with the precious metal off by 0.60% to trade at $1711 at the close of trade in New York on Friday. The decline marks the third consecutive week of losses for bullion which encountered support at $1700 as positive US data continues to weigh on prospects for further Fed easing. Gold now looks poised for a test of critical support at $1693 with a break below this level risking substantial losses for the yellow metal.

The advance GDP data released on Friday showed the US economy growing at an annualized rate of 2.0% during the third-quarter, exceeding market expectations for a 1.8% print with personal consumption coming in just below expectations with a read of 2.0%. The data may weigh on expectations for further easing from the Federal Reserve as the economic recovery starts to slowly gather pace. As such, gold prices may remain under pressure as diminishing expectations for additional liquidity injections from the central bank reduce demand for gold as a classic hedge against inflationary pressures.

Investors will be closely eyeing US economic data next week with personal income/spending, consumer confidence and non-farm payrolls on tap. Income is expected to rise by 0.4% in September up from a previous print of 0.1% with spending seen rising to 0.6% from 0.5%. October consumer confidence is expected to print at its highest levels since February of 2008 (the last time equities were at these levels) with estimates calling for a read of 72.5, up from previous print of 70.3. While the data is expected to reinforce last week’s stronger than expected GDP print, reaction to the releases may be muted ahead of Friday’s highly anticipated non-farm payroll report.

Consensus estimates call for NFPs to print at 124K, toping last month’s read of 114K with the unemployment rate widely expected to uptick to 7.9% (which may be a result of discouraged workers returning the labor force). Of particular interest will be the participation rate which rose last month from the lowest levels seen since September 1981 at just 63.6%. With Chicago Fed President Charles Evans having already cited that the central bank is likely to maintain its accommodative stance so long as inflation remains below 3% and unemployment above 7%, investors will be closely examining Friday’s employment data to gauge its potential impact on future monetary policy.

From a technical standpoint, gold may yet have further declines before moving higher with daily RSI now below 40 for the first time since June and marks the first directional break of magnitude below this level since early May. Bullion closed out the week just above the former channel resistance dating back to the June high at $1711. Critical support remains at the confluence of the 61.8% Fibonacci extension taken from the December and May troughs and the 38.2% retracement off the May lows at $1693. Our longer-term outlook remains weighted to the topside so long as this level is respected with only a break below invalidating our bias. Such a scenario eyes interim support targets at $1671 pivot level (May high), the 200DMA at $1663 and the June high at $1641. Interim topside resistance now stands at $1720 backed by the 78.6% extension at $1738. –MB