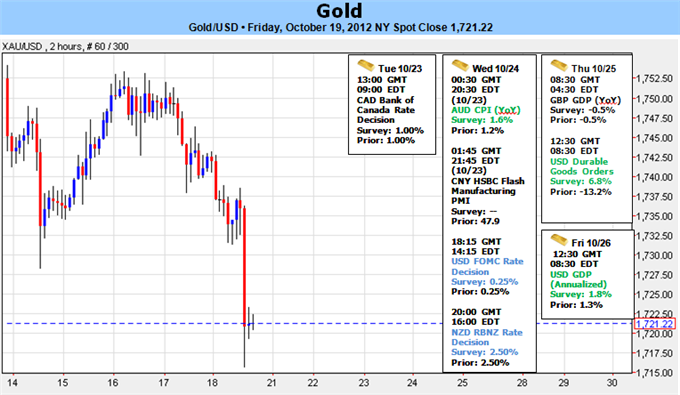 Gold Correction Gathers Pace- $1693 in Focus Ahead of FOMC

Gold continued its decline off the October high at $1796 with the precious metal shedding nearly 2% on the week to trade at $1722 at the close of trade in New York on Friday. The move marks the second weekly loss for bullion with prices continuing to track risk amid ongoing weakness in broader equity markets. Losses have been further exacerbated by advances in the greenback which pared early losses to close firmer on the week.

Disappointing corporate earnings and weaker than expected existing home sales late in the week kept risk on the defensive with stocks paring nearly the entire week’s gains as haven flows kept the US dollar well supported. The European Summit which began on Thursday offered no clarity as to the steps policy makers will take to address the ongoing crisis that has gripped the region for nearly three years. In fact, German Chancellor Angela Merkel prepped markets, stating that she expects no decisions to be taken this week as policy makers lay the ground work for the December meeting where they will discuss steps towards further economic, monetary and financial integration among the member states.

Looking ahead to next week, gold traders will be taking cues from the FOMC interest rate decision on Wednesday and 3Q GDP data on Friday. Although the central bank is not expected to alter its policy stance, investors will be closely eyeing the accompanying statement for an updated assessment of the domestic economy. With headline CPI data this week coming in above expectations at 2.0% y/y, traders will be closely eying the statement’s language as it pertains to inflation. The Fed has remained unwavering with its expectations for price growth with the September statement citing that, “Inflation has been subdued, although the prices of some key commodities have increased recently,” and that, “Longer-term inflation expectations have remained stable.” Should the statement cite added concerns about rising prices, look for gold to remain well supported as investors flock into bullion as a traditional hedge against inflationary pressures. On the other hand, if there’s no change, gold is likely to continue to track risks as gains in the greenback weigh on precious metal.

From a technical standpoint, gold remains poised for weakness in the near-term with prices breaking below interim supported noted last week at the 78.6% Fibonacci extension taken from the December and May troughs at $1738 before encountering support at the September 13th low at $1715. Critical support now rests at the confluence of the 61.8% extension and the 38.2% retracement off the May advance at $1693. We reserve this level as our bottom limit with only a break below this threshold invalidating our long-term bullish outlook. Resistance now stands at former support at $1738 backed by the weekly high at $1758 and the monthly high at 1796. Note that daily RSI closed just above the 40-threshold with a break below this mark suggesting that a deeper correction towards $1693 may yet be underway. –MB