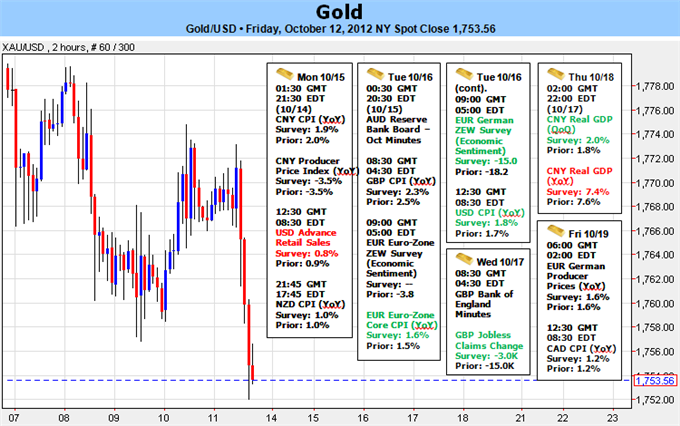 Gold was softer at the close of trade this week with the precious metal shedding 1.8% to trade at $1754 at the close of trade in New York on Friday. While further weakness is likely in the near-term, losses are likely to remain limited as central banks around the world continue to strike a dovish outlook for monetary policy amid ongoing concerns regarding global growth prospects. As such, we will remain neutral at these levels after prices triggered our primary objective at $1795, with pullbacks likely to offer favorable long entries.

The Fed’s beige book released earlier this week struck a more upbeat tone than expected with all twelve Fed districts reporting that economic activity “expanded modestly” with improvements seen in manufacturing and housing. Although employment remained little changed, the report marks the first time all twelve districts reported improvements in underlying economic activity with some districts citing improvements in residential real estate conditions as existing home sales and residential construction strengthened. While the report bodes well for the US economy, the data is unlikely to weigh on monetary policy in the near-term as Chicago Fed President Charles Evens has already explicitly cited intentions to maintain an accommodative stance so long as the unemployment rate remains above 7% and inflation below 3%. As such, it’s likely that gold will remain in demand as a hedge against inflation amid global central bank easing.

Looking ahead to next week, gold trader will be closely eyeing inflation data on Tuesday with September CPI expected to up-tick to 1.9% y/y from 1.7%. Core prices (ex food & energy) are expected to rise to 2.0% from 1.9% and a stronger than expected print could further support gold prices as demand for the precious metal builds on concerns over faster price growth. Inflation data out of China on Sunday night may also impact prices with consensus estimates calling for CPI to ease to 1.9% from 2.0%. Should the data heighten the threat for a ‘hard landing’, gold may continue to ease in the near term as concerns regarding global growth prospects outweigh expectations for further central bank easing. Although Premier Wen Jiabao has called for additional monetary support from the PBoC, there has been no indication that the central bank is poised to do so and accordingly, the data may ultimately stoke fears for a ‘hard landing’ in the world’s second largest economy.

From a technical standpoint gold looks to have started a correction lower with critical near-term support seen at the confluence of key Fibonacci levels at $1739. Longer-term prospects remain bullish with only a break below this level invalidating our directional bias. Such a scenario risks declines to $1715 pivot level and the 61.8% Fibonacci extension taken from the December and May lows at $1693. We remain neutral at these levels while noting interim resistance at $1775 and the 100% extension at $1795. Daily RSI now looks poised for a test of the 50-mark with a break below this level suggesting that a more substantial correction may be underway. A breach back above the weekly high at 1780 looks to a test of the yearly highs at $1796 with subsequent topside targets eyed at $1840 and $1860. -MB