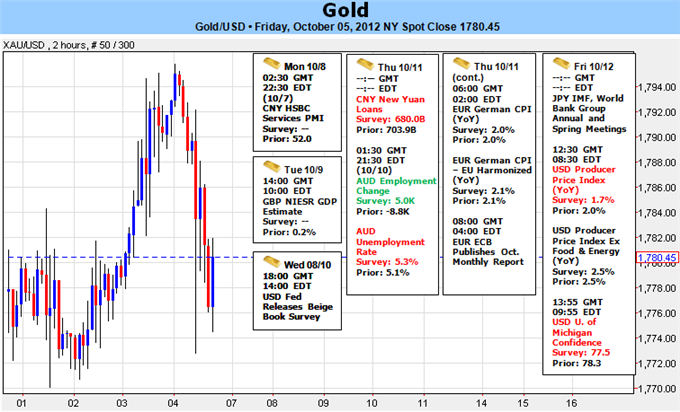 Gold continued its advance this week with the precious metal gaining nearly 0.53% to trade at $1782 at the close of trade in New York on Friday. Bullion closed the week just below fresh eleven month highs hit in the previous session after a stronger-than-expected print on the September non-farm payrolls saw prices come under pressure. As central banks around the world continue to strike a dovish outlook for monetary policy, declines in gold are likely to be limited as ongoing concerns regarding growth prospects continue to offer support for the yellow metal as a hedge against dollar diluting easing policies.

The release of the FOMC minutes on Thursday highlighted concerns over ‘persistent headwinds’ to the recovery with the report specifically citing continued weakness in the housing market and current fiscal policy as a ‘drag’ on the domestic economy. With Federal Reserve Chairman Ben Bernanke having already explicitly cited the central bank’s focus on supporting the ailed labor market, we will be closely watching the Fed’s Beige Book on tap for next week.

In the current market environment, gold prices will continue to take cues from global central banks as investors weigh the prospects for future policy with next week’s release of the Fed’s Beige book on Wednesday highlighting the biggest event risk for bullion. In contrast with the FOMC minutes, the Beige Book may continue to reflect a gradual recovery with the survey showing modest improvements across the 12-districts. However, the slew of Fed officials scheduled to speak next week may highlight a shift in the policy outlook after the NFP report showed the economy on a firmer footing and central bank hawks may continue to strike down the Fed’s open-ended asset purchase program as job growth picks up.

September Non-farm payroll data released on Friday showed the US economy adding 115K jobs last month with the unemployment rate unexpectedly falling to 7.8% from 8.2%. The decline marks the lowest read on unemployment since January of 2009 dampened the appeal of gold as a hedge against inflation. As economic data continues to improve, demand for bullion may come under pressure as it limits the scope for the Fed to implement further dollar diluting easing policies.

From a technical standpoint, gold remains poised for further gains in the medium-to-long term with this week’s advance taking the precious metal to our primary objective cited last month at the confluence of the 100% Fibonacci extension taken from the December and May troughs and the 161.8% extension taken from the August 2nd and 31st lows at $1795. The move represents a fresh 2012 high for bullion with a breach above the November highs at $1803 exposing subsequent topside resistance targets at $1840 and the 123.6% extension at $1859. While broader metrics do suggest further advances in the weeks ahead, clear RSI divergence suggests that a near-term correction may be likely as the oscillator looks to test trendline support dating back to the May lows. Interim support rests at $1775 with only a break below key support at $1739 invalidating our directional bias. -MB