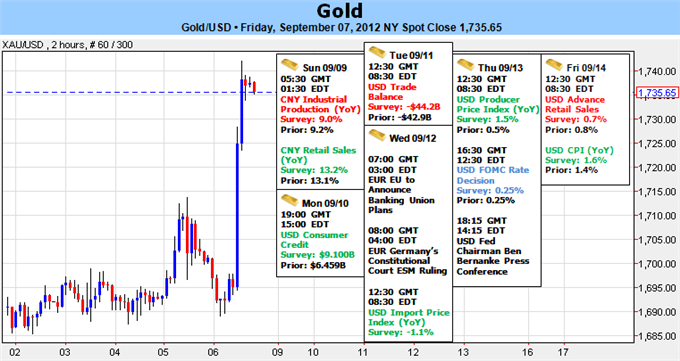 Gold pushed higher this week with the precious metal gaining more than 2.6% to trade at $1736 at the close of trade in New York on Friday. The advance which started in mid-August has continued to gather pace with bullion hitting its highest level since late February and although our bias remains weighted to the topside, the technicals continue to suggest that the metal may be over-extended at these levels with a correction of magnitude likely in the days ahead. The downside is likely to remain limited however ahead of key event risk next week with all eyes now turning to the FOMC interest rate decision on September 13th.

The US non-farm payroll report on Friday further fueled the advance in gold after the report grossly missed estimates with a print of just 96K for the month of August. Although the unemployment rate fell to 8.1% from 8.3%, a deeper look at the data shows the size of the labor force continuing to contract with the participation rate falling to 63.5, marking the weakest participation since September of 1981 and further skewing the unemployment rate to the downside. When considering the continued deterioration in the size of the labor force (which has been steadily declining since the 2007 highs), Fed policy makers have become increasingly concerned that the natural rate of unemployment may exceed 7% from its historic 5.5%-6%. Manufacturing jobs also showed further signs of stress with the sector shedding 15K jobs last month, missing calls for the addition of 10K. Friday’s labor report is likely to add further pressure on the central banks to embark on another round of easing as the domestic employment picture grows increasingly bleak.

Looking ahead to next week, the FOMC interest rate decision takes center stage as investors weigh the prospects for monetary policy. At last week’s Economic Policy Symposium at Jackson Hole, Federal Reserve Chairman Ben Bernanke vowed that the central bank would act ‘forceful in supporting a sustainable recovery’ with the chairman speaking at length in defense of the Fed’s actions to date in response to the global crisis. As such, it’s likely that the Fed may look to announce further steps to stimulate the ailed jobs market in light of Friday’s report with Goldman Sachs factoring in the probability of QE3 at more than 50% at the September 12-13 FOMC meeting. However there is still plenty of speculation regarding what form of QE may be announced with many calling for the Fed to extended its ‘late 2014’ language to mid-2015 or beyond. Although it is not our view that such actions are warranted at these levels (with the S&P hitting its highest levels since January 2008 and NASDAQ at highs not seen since December 2000), it’s likely that gold prices will remain well supported as investors begin to price in a higher likelihood of additional dollar diluting easing measures from the central bank.

From a technical standpoint, gold remains poised for further gains in the medium-to-long term with this week’s advance taking the precious metal to our objective cited last week at the 100% Fibonacci extension taken from the August 2nd and 31st lows at $1739. While broader metrics do suggest further advances in the weeks ahead, a near-term correction is extremely likely as daily RSI hits extremes not seen since August of 2011 (just before hitting all-time highs at $1921). Daily interim support now rests with the 61.8% extension at $1704 and is backed by $1692 and the former May high at $1671. A break above the $1739 threshold exposes subsequent resistance targets at the 123.6% extension at $1762 and the 161.8% extension just shy of the $1800- mark. Again we note the likelihood of a pullback of magnitude here with dips in gold offering favorable long entries. -MB