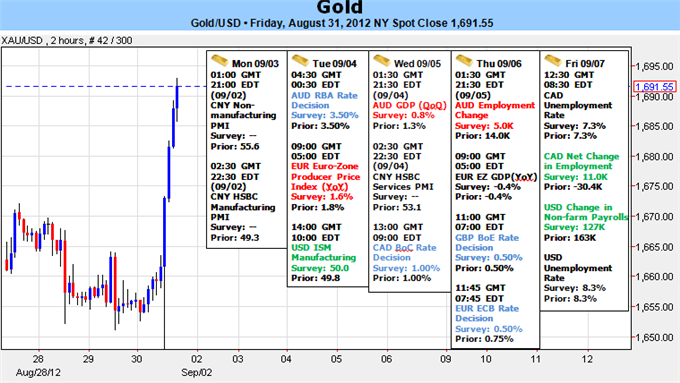 Gold continued its advance this week with the precious metal gaining 1.29% to trade at $1692 at the close of trade in New York on Friday. Bullion was under pressure early in the week as investors scaled back bets ahead of Friday’s highly anticipated speech by Federal Reserve Chairman Ben Bernanke at the annual Economic Policy Symposium at Jackson Hole. His remarks were enough to feed market expectations for further Fed action with the surge in gold on Friday suggesting that market participants have already begun to factor in another round of quantitative easing.

The Jackson Hole summit was the highlight of the week as Bernanke took center stage with his remarks fueling massive swings in broader risk assets as investors weighed the prospects of future monetary policy. Equity markets initially fell on Bernanke’s remarks as he cited that, ‘using non-traditional policy tools is challenging’ and that, ‘these operations could impair functioning of the securities markets.’ However the decline was short-lived as the chairman noted that the Fed would act ‘forceful in supporting a sustainable recovery’ with Bernanke speaking at length in defense of the Fed’s actions to date in response to the crisis. Gold quickly pared earlier losses with the yellow metal surging into the close of trade on Friday to close at 5-month highs.

So what did we learn from Bernanke’s remarks? Although the Fed Chairman held the door open to further expand monetary policy, his remarks struck a slightly different tone from the very dovish FOMC minutes released earlier this month. Indeed, it seems as though QE remains an option for the central bank but it’s likely that the Fed will continue to sit on the sidelines unless the economic docket turns increasingly bleak. We have already heard Fed officials vow to aggressively support the recovery as housing, unemployment, the European crisis and the fiscal cliff continue to pose serious ‘headwinds’ to the economy. However, his defense of quantitative easing and strong references to weakness in the labor markets as a ‘grave concern’ fueled QE speculation with the gold poised for a run at the $1700 figure. It’s important to note that no real commitment has been made today and with thin holiday trade in full effect the advance in bullion may remain limited ahead of the September 13th FOMC interest rate decisions.

From a technical standpoint, gold has now completed a 5-wave advance off the August lows and although our bias remains weighted to the topside, we cannot rule out the possibility for a near-term correction before continuing higher. Gold closed out the week just below the key 61.8% Fibonacci extension taken from the December and May lows at $1692 after breaching above channel resistance dating back to the April lows. A break above this level eyes topside resistance targets at $1715, the March highs at 1726 and the 78.6% extension at $1738. Look for a downside correction to find support at the previous May high at $1671 with only a break below this week’s low at $1646 invalidating our directional bias. Such a scenario exposes subsequent floors at the 38.2% extension at 1630, a level that has served as a clear pivot in price action from the start of the year. Note that RSI closed out the week above the 70-overbought threshold with divergence in price action warning of a possible short-term correction in the days ahead. -MB