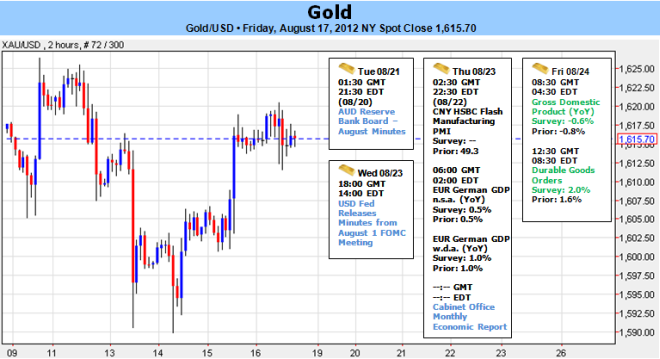 Gold is marginally softer this week with the precious metal off by just 0.24% by the close of trade on Friday. Gold has held a well-defined range this month as prices continue to consolidate into a tight range between $1590 and $1625. Summer trading is in full effect with thin trading conditions offering little in the way of a conviction bias as market participants await direction from policy makers. Expectations for further easing from the ECB, which is more than likely at this point, combined with ongoing speculation that the Fed will inject more liquidity to fuel economic growth has kept prices well supported in the interim, but volatility is likely to return in the weeks ahead as all eyes now turn to the Jackson Hole Economic Policy Symposium at the end of the month.

Looking ahead to next week, minutes from the latest FOMC policy meeting will be central focus for gold traders as market participants weigh the prospects for further Fed easing amid the ongoing slowdown in global growth. As the Fed continues to soften its dovish tone for monetary policy, it has become increasingly evident that the central bank will refrain from further easing measures unless the US economy faces a real danger of slipping back into recession. Remarks made by various Fed members this week, suggests that there is dissention among the voting members as to whether the central bank should do more to support the sluggish recovery. Indeed we did hear commentary from Richmond Fed President Jeffrey Lacker who cited that, “There are a lot of people overestimating the extent to which monetary policy is capable of having any sustained effect on growth or labor markets.” Lacker has dissented form the past five FOMC policy meetings, warning that further action risks stoking inflation and the use of specific dates with regards to interest rate expectations may confuse market participants. His remarks were echoed by Minneapolis Fed President Narayana Kocherlakota who stated that he believed the central bank had gone too far with its pledge to hold rates near zero through late 2014. As such, we expect topside advances in gold to remain limited in the interim as expectations for further Fed easing wane with the technicals suggesting a break-out of a multi-month consolidate formation may be imminent in the weeks to come.

From a technical standpoint, gold has continued to consolidate into the apex of a large triangle formation that has held for four months now with prices ending the week just below trendline resistance dating back to the June highs. A breach above this mark eyes interim resistance levels at the 38.2% Fibonacci extension taken from the record highs made in September and the February highs at $1640 and the 200-day moving average at $1648 with a break above long standing trendline resistance dating back to the all-time highs putting a bullish tone on the yellow metal. Interim support continues to hold at the 50% extension at $1591 backed by triangle support dating back to the May lows and the 61.8% extension at $1545. While our broader fundamental bias remains bearish, we maintain our neutral outlook at these levels pending a break-out of this long-term triangle formation. -MB