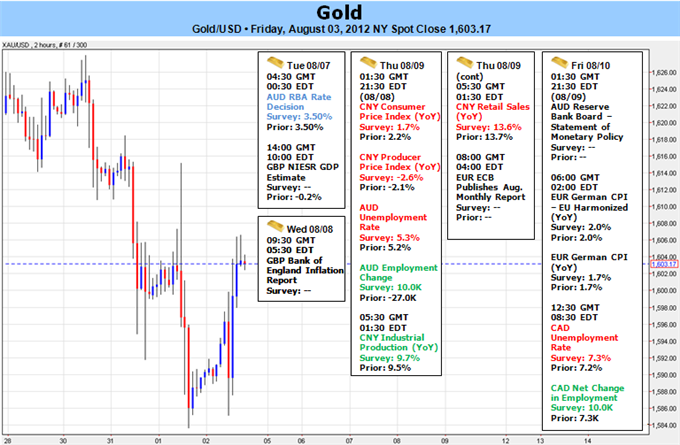 Gold Churns and Burns Traders Looking for the Breakout

Gold is weaker at the close of trade this week with the precious metal off by more than 1.1% by the close of trade in Friday. This week has been marked by key central bank decisions from the Fed and the ECB with Friday’s non-farm payroll print offering gold some relief after three days of consecutive declines saw prices fall more than 2.18% to $1588. Despite the week’s price action however, gold has remained within a well-defined range as the yellow metal continues to consolidate into the apex of a three month long triangle formation.

The FOMC policy meeting on Wednesday roiled markets as the committee voted to maintain its current stance on monetary policy. The move fueled a sell-off in broader risk assets as investors, eager for more accommodative measures from the central bank, pared back bets for another round of large scale asset purchases. The ECB followed suite with President Mario Draghi’s remarks falling well short of market expectations for some form of easing amid ongoing concerns over the deepening crisis in Europe. Expectations for action were immense after comments made by Draghi last week where he pledged to do “whatever” was necessary to defend the euro including further rate cuts, another round of LTROs, and most importantly, outright sovereign bond purchases. The announcement fueled a massive sell-off in equity markets with the IBEX 35 (Spain’s stock market) ending the session of by nearly 5%. Friday’s NFP print was the week’s turning point with a much stronger than anticipated print of 163K prompting a rally that saw equity markets pare the entire week’s decline to close higher with gold lagging as trimmed QE bets saw demand for the yellow metal dwindle. As we’ve noted multiple times this year, gold has all but lost its “safe haven” status as prices continue to track risk with sell-offs moving nearly lockstep while rallies outpaced advances in bullion.

Looking ahead, as the Fed continues to soften its dovish tone for monetary policy, it has become increasingly evident that the central bank will refrain from further easing measures unless the US economy faces a real danger of slipping back into recession. As such, we expect topside advances in gold to remain limited in the interim as prices continue to range between $1550 and $1630. From a technical standpoint, bullion has continued to trade within the confines of a triangle formation dating back to the May lows with a false break last week quickly paring advances back into its former range. In broader terms, gold has continued to hold between the 38.2% and 61.8% Fibonacci extensions taken from the all-time highs made back in September and the February high at $1640 and $1545 respectively with interim weekly support coming in at the 50% extension at $1590. As gold continue to consolidate into the apex of the embedded triangle, we remain neutral until such a time when prices have cleared above or below the aforementioned long-term Fibonacci levels. It’s also important to note that recent downward pressure on the greenback now has the USDOLLAR Index facing key support at 9990. A break below this mark risks a more substantial correction lower in the reserve currency, with such a scenario likely to fuel gold with enough momentum to breach above its more than 3-month long range. -MB