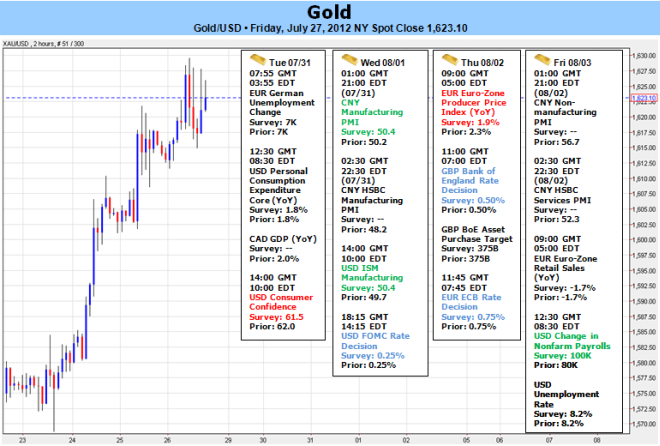 Gold Break-Out in Question Ahead of FOMC, NFPs

Gold is markedly stronger at the close of trade this week with the precious metal advancing 2.23% by the close of trade on Friday. Gold has continued to track risk with a substantial three day rally breaching above key trendline resistance dating back to June 6th before hitting fresh monthly highs at $1630. Although the advance now exposes key targets above the $1670, we remain cautious ahead of major event risk next week with a barrage of interest rate decisions and the US non-farm payroll figures on tap.

The FOMC interest rate decision and key employment data will be central focus for gold traders next week as investors weigh prospects for future monetary policy. Although it has been suggested that the Fed may look to announce another bout of quantitative easing next week, it remains our view that the central bank is unlikely to implement such a measure at these levels, especially ahead of Friday’s non-farm payroll print. It’s important to note the idea of diminishing returns here with regards to easing measures in that each time the Fed enacts such policies, the broader impact because less effective. As such, with growth and inflation data more-or-less in line with consensus estimates, it’s difficult to justify further easing in the current environment. It is more likely that we will see the central bank continue to soft scale back its dovish outlook for monetary policy and we should see the committee stand pat for the remainder of the year. Pertinent data kicks off on Tuesday with June personal income and spending metrics expected to show further improvement from the consumer side and ends on Friday with the highly anticipated non-farm payroll figures. Consensus estimates call for the addition of 100K jobs for the month of July, up from a previous print of just 80K with the unemployment rate expected to hold steady at 8.2%. Should the data come in dramatically below expectations look for gold to benefit as market participants look to diversify away from the US dollar.

From a technical standpoint, gold passed a milestone this week with prices breaking out of a near-three month long triangle formation before closing the week at $1620. The break-out puts a bullish tone on the yellow metal as daily RSI looks to breach the 70-mark for the first time since March, with interim topside targets now eyed at the June high above $1640 backed by the 200-day moving average at $1656 and trendline resistance dating back to the all-time highs made back in September (currently around $1673). Interim support rests with former triangle resistance, now support, and the $1600 level. Only a break below the weekly low at $1563 would invalidate this particular interpretation. That said, we remain neutral on gold prices ahead of key event risk next week with the interest rate decisions from FOMC, ECB, BoE and NFP’s likely to steer prices in the near-term. –MB