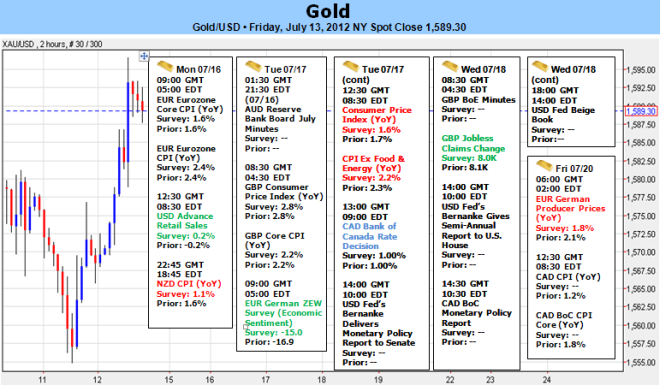 Gold is modestly firmer at the close of trade this week with the precious metal advancing 0.59% by the close of trade on Friday. Prices have largely remained within a well-defined range for nearly nine weeks now as market participants attempt to gauge future monetary policy from global central banks with gold seemingly tracking broader risk assets since late June. Currently, bullion’s 20-day correlation with the S&P 500 has reached its highest levels since November 2010 at 0.72 and the metal is likely to maintain its current range as markets continue to cope with growing concerns over the global growth prospects.

On Wednesday, the FOMC minutes offered little added hope for investors who were eagerly anticipating greater calls for additional monetary support. Indeed the majority of committee members continued to see little scope for another large scale asset program with the minutes revealing that only “A few members said more stimulus would probably be needed.” As the fresh batch of central bank rhetoric dampens the probability for QE3 the shift in policy outlook increases the appeal of the US dollar, which is likely to limit substantial advances in gold prices in the interim.

Looking ahead to next week, traders will be lending a keen ear to remarks made by Federal Reserve Chairman Ben Bernanke as he testifies before the Senate banking committee on Tuesday and the House Financial Services committee on Wednesday. However investors may overlook Bernanke’s remarks ahead of the Fed’s beige book which is scheduled for release on Thursday at 1800GMT and we may see the report further highlight continued improvements in the Fed’s twelve districts after last month’s upbeat assessment. However if the report shows added signs of strains on economic activity, speculation for further central bank easing could keep gold prices well supported as the appeal for the yellow metal as a store of wealth rises.

From a technical standpoint, gold has remained in consolidation for the past nine weeks as prices consolidate into the apex of a triangle formation within the range between the 38.2% and 61.8% Fibonacci extensions taken from the September and February highs at $1640 and $1545 respectively. A break below the 61.8% extension eyes subsequent floors at $1500 and the confluence of the July 2011 lows and the 78.6% extension at $1480. Interim resistance stands at $1600 with a break above the July highs at 1625 alleviating further downside pressure in the short-term. That said, we remain neutral at these levels pending a break out of this multi-month range. -MB