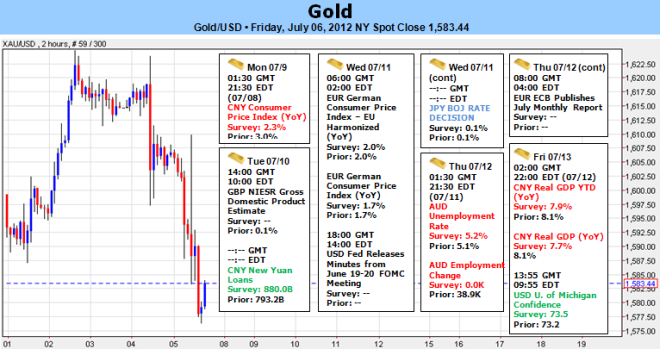 Gold was off more than 1% this week with the precious metal closing at $1581 on Friday after a disappointing NFP print weighed broader commodities and equity markets. Before the close of trade on Friday, gold had pared the entire week’s advance with the technicals suggesting the pair may test the lower bound of its recent range. However with gold now holding a $100 range for the past two-months, we remain on the sidelines pending a break-out of its recent range with our longer-term bias still weighted to the downside.

A weaker-than-expected print on the June non-farm payrolls report weighed on broader risk appetite with gold tracking equities and other growth-linked commodities lower on Friday. NFPs came in at 80K, missing consensus estimates for a read of 100K with the unemployment rate holding at 8.2% as expected. A drill down deeper into the data shows a slight improvement in the participation rate which saw an uptick as discouraged workers returned to the labor force. Wage growth also unexpectedly rose in June to its fastest pace this year. The data was just weak enough where it’s unlikely to warrant further easing from the Federal Reserve, but will continue to weigh on broader market sentiment as concerns over a global slowdown in economic growth continues to take root. Gold plummeted 1.65% on the heels of the release as fears of deflation reduced demand for the previous metal as a hedge against rising prices.

Looking ahead to next week, traders will be closely eyeing minutes from the June 20th FOMC policy meeting amid ongoing concerns over domestic growth prospects and a protracted recovery in the labor market. Investors will be weighing the outlook for future monetary policy in light of Friday’s employment data after Chairman Bernanke cited that the central bank was prepared to act should conditions deteriorate further. However with the recent uptick in wage growth and continued stickiness in underlying price growth, we find it unlikely that the Fed will embark on further easing at these levels. Look for gold to continue to react sharply to fluctuations in the dollar with the 20-day inverse correlation between the Dow Jones FXCM Dollar Index (Ticker:USDOLLAR) and spot gold prices hitting their highest levels since mid-April.

From a technical standpoint, gold has remained in consolidation for the past eight weeks with the price holding its recent range between the 38.2% and 61.8% Fibonacci extensions taken from the September and February highs at $1640 and $1545 respectively. Friday’s decline pared the entire week’s advance suggesting further weakness moving ahead with our medium-term bias remaining weighted to the downside so long as the February high at 1641 is respected. Soft support rests at $1561 backed by the range low at 1545. As Jamie Saettele notes, “This length of consolidation will probably fuel an impressive break… eventually,” with a break below the 61.8% extension eyeing subsequent floors at $1500 and the confluence of the July 2011 lows and the 78.6% extension at $1480. Interim resistance stands at $1624 with a break above the June highs alleviating further downside pressure. Such a scenario invalidates our bias with topside targets seen at the 200-day moving average at $1660, the May highs at $1671, and the $1700 mark. That said, we remain neutral at these levels pending a break out of this multi-month range. -MB