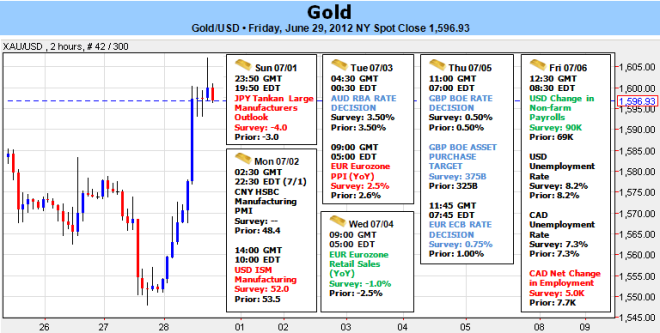 Gold is higher at the close of trade this week with the precious metal advancing 1.79% to end the month at the $1600 mark. A massive rally in broader-risk on Friday fueled a 3.06% rally in gold after EU leaders agreed to strip emergency loans granted to Spanish banks of their seniority status which guaranteed up to €100 billion to creditors in the event of a default, an obvious disadvantage to private bondholders. The move succeeded in putting pressure on Spanish yields which had reached their highest levels since November of 2011 this month with the 10 year falling from 6.8% to 6.3% on Friday. While the announcement does little to adr3ess the structural problems facing the region, it does alleviate Spanish funding concerns in the near-term with a substantial rebound in risk appetite weighing on the greenback to the benefit of

Looking ahead to next week, traders will be closely eyeing interest rate decisions from the RBA, BoE, and the ECB with Friday’s key non-farm employment data likely to steal the spotlight. While Australia and the UK are widely expected to leave rates unchanged at 3.5% and 0.50% respectively, the focus remains on the ECB with divergences in market expectations and economist estimates likely to fuel added volatility in markets. Credit Suisse overnight swaps suggest that market participants are factoring in just a 37% chance of a rate cut on Thursday while 45 of the 57 economist polled by Bloomberg are calling for lowering borrowing costs from the central bank. As such, look for gold to respond accordingly with further easing likely to keep prices well supported as investors look to hedge against the currency depreciation and inflation. Friday’s employment data may have the largest impact on gold prices next week with consensus estimates calling for the addition of just 90K jobs for the month of June, a slight improvement from the 69K jobs created in May. In light of the Fed’s recent decision to extended operation twist as opposed to embarking on another round of large scale asset purchases, a weaker than-expected print is likely to stoke speculation for further Fed easing, again likely to prop up gold prices in the near-term.

From a technical standpoint, gold still remains within the confines of a descending channel formation dating back to the February highs with the price closing just below the confluence of the 50-day moving average and the 61.8% retracement taken form the June 15th decline at $1601. A breach above this mark exposes subsequent topside resistance targets at the April lows at $1612 and the confluence of the 100-day moving average and the June highs around $1641. Note that daily RSI has continued to hold above the 40-mark with a breach above 60 shifting our focus higher. At face value, it’s important to keep in mind that gold has largely been range bound with prices holding between the 38.2% Fibonacci extension taken from the February and June crests at $1540 and the June highs at $1640. Although our longer-term outlook on the precious metal remains weighted to the downside, fundamental factors and weakness in the greenback could see prices well supported in the near-term with our bias on the gold remaining neutral pending a break out of this range. -MB