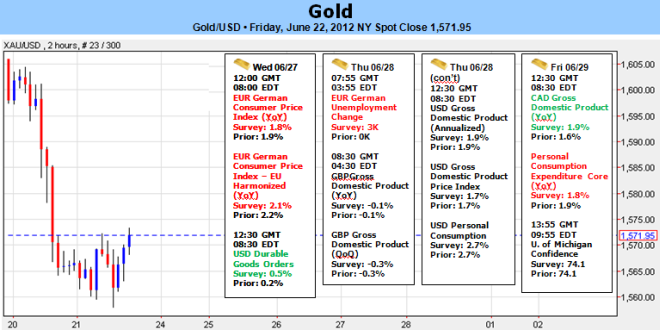 Gold was sharply lower at the close of trade this week with the precious metal plummeting 3.63% to close out its largest decline since the week ending May 11th. Strength in the greenback and dwindling expectations for another round of quantitative easing from the Fed, weighed on demand for the precious metal which continues to trade within the confines of a bearish technical formation. With price of gold now nearly unchanged on the year (up a fractional 0.5% YTD) the outlook remains heavy with price action this week pointing to further declines ahead.

Gold prices came under substantial pressure after the Federal Reserve refrained from announcing another round of quantitative easing on Wednesday with the central bank opting to extend the sales of short-term government debt to fund purchases of longer-dated securities, a program dubbed “Operation Twist.” The decision roiled markets as expectations for another large-scale asset purchase program mounted ahead of the FOMC policy decision. Although the central bank held off on QE3, downgrades on growth, employment, and inflation forecasts suggest that more easing may be in the cards in the months ahead with Chairman Bernanke citing that, “additional asset purchases are among the things we would consider if we need to take additional measures to strength the economy.” However in the absence of further dollar diluting easing measures (operation twist being a more sterile form of easing) gold has lost its luster as an inflationary hedge with the precious metal likely to remain under pressure as the greenback stays well supported.

Looking ahead to next week, traders will be closely eyeing key data out of the US with consumer confidence, durable goods orders, personal income/spending, the University of Michigan confidence survey’s and the final read on 1Q GDP and personal consumption figures on tap. With the recent softness in domestic economic data prompting the Fed’s move to extend operation twist, investors will now be closely eying figures on consumer confidence and growth and if the data continues to tail off, look for calls for further Fed action to take root. However with Bernanke specifically citing concerns about diminishing returns on continued Fed easing, any additional efforts to support the economy are likely to come by way of other non-standard measures as market tolerance begins to build. As such, look for the use of gold as a ‘haven play’ and a hedge against inflationary pressures to wane with advances in the precious metal likely to be limited in the interim.

From a technical standpoint, gold has remained in remained within the confines of a descending channel formation dating back to the February highs with the price closing at $1570 after rebounding sharply off the 38.2% Fibonacci retracement taken from the February decline at $1628 earlier in the week. Interim daily resistance now stands at the 23.6% retracement at $1590 with subsequent ceilings seen at $1628 and the 100-day moving average at $1651. Soft interim support rests at $1560 and is backed by the June low at $1544 and the 2012 lows put in last month at $1528. Look for bullion to remain under pressure with a break below the $1528 threshold risking substantial losses for the precious metal with only a breach above the monthly highs at $1640 dispelling further downside pressure.