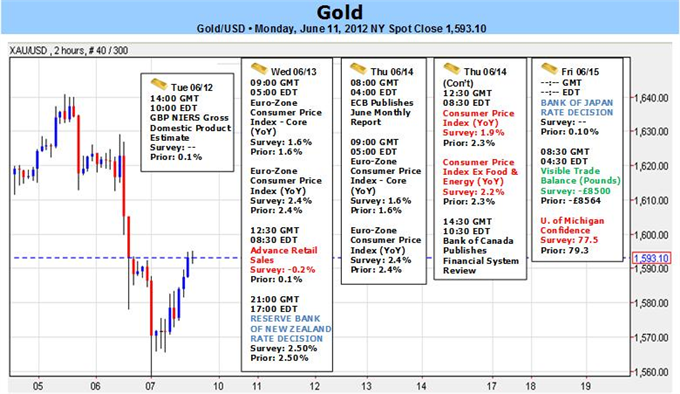 Gold is markedly weaker at the close of trade this week with the previous metal off by nearly1.8% to close at $1594 in New York, marking its worst performance since the week ending May 11th when gold tumbled 3.71%. Prices saw the largest single day decline since April 4th on Thursday after Fed Chairman Ben Bernanke’s testimony before congress where he offered now clear signal for further easing from the Fed. While the chairman did not specify, he did note that the central banks still had options for further easing should conditions warrant. The balanced tone saw speculation for further another round of quantitative easing subside with gold coming under increased pressure as demand for gold as a hedge against inflation dwindled with the yellow metal falling nearly 1.9% on the session.

Gold prices have continued to react sharply to QE speculation with Eurozone concerns unable to fuel the metal with any type of substantial rally. Hesitant gains in gold, despite record low bond yields, highlights the metals break with broader risk trends with prices taking cues off fluctuations in the greenback as investors weigh prospects for further dollar diluting policies from the Federal Reserve. Looking into the week ahead, market participants will be lending a keen ear to remarks made by Fed voting members Dennis Lockhart, John Williams, and Sandra Pianalto who are all scheduled to speak on Monday. Dollar price action will also be crucial with the Dow Jones FXCM Dollar Index (USDOLLAR) eyeing key Fibonacci resistance at the 10,255. Look for prices to remain supported should the greenback break back below the October highs at 10,134, while a breach above 10,255 would likely risk further losses for the precious metal.

From a technical standpoint, gold remains within the confines of a newly adjusted descending channel formation off the February highs with the precious metal reversing sharply after testing key resistance at the confluence of the 38.2% Fibonacci extension taken from the September and February highs and channel resistance at $1640. This level now serves as out topside limit which if breached dispels further downside pressure in the near-term for bullion with such a scenario eyeing topside targets at the 200-day moving average at $1680 backed by the 23.6% extension just shy of $1700. Interim daily support now rests at the 50% extension at $1590 backed by the 61.8% extension at $1545. A break below the December lows at $1525 risks substantial losses with subsequent floors seen at the 78.6% extension at $1480 and $1445. We remain neutral on gold at these levels pending either a topside breach above channel resistance or a break below the September lows with price action likely to remain range bound in the interim. -MB