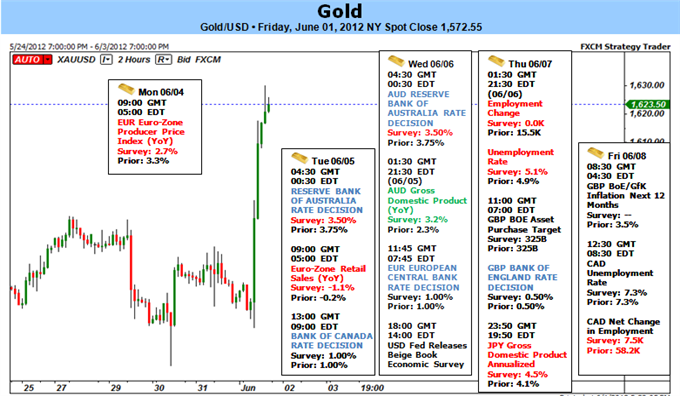 Gold was sharply higher at the close of trade this week with the precious metal surging 3.87% to close at $1622.75 in New York. The rally marks the largest single week advance since the week ending January 27th when prices soared by more than 4.4% as it approached the $1740 level. The bulk of the week’s advance came on Friday after a dismal print on May employment figures fueled speculation of further easing from the Federal Reserve. Non-farm payrolls grossly missed consensus estimates with the report showing the addition of just 69K jobs last month, missing expectations for a read of 150K, while the unemployment rate up-ticked to 8.2%. The results sparked a substantial sell-off in broader risk assets with yields on US Treasuries hitting record lows as investors flocked into the safety of the yen and government debt amid concerns that the dollar will come under pressure should the Fed decide to embark on another round of quantitative easing: a dollar diluting endeavor at best, in our humble opinion.

Looking ahead to next week, gold is likely to take cues off of price action in the greenback with the Dow Jones FXCM Dollar Index (Ticker: USDOLLAR) reversing sharply on Friday after on the heels of the NFP print. The index remains at oversold levels here with the start of June trade likely to offer further clarity over the coming sessions as investors weigh the prospect of further Fed easing. Although the most recent employment figures were much weaker than anticipated, it’s unlikely that Chairman Ben Bernanke & Co. will look to announce further easing just yet as gaining support for another round of large scale asset purchases is likely to be difficult in today’s political environment. However as conditions in Europe continue to deteriorate and expectations for a Greek exit take root, the central bank may see scope to ease policy further as contagion fears threaten to dry up liquidity. That said, look for gold prices to largely be driven by broader fluctuations in the dollar, with a pullback in the dollar index likely to accompany a rally in the yellow metal.

From a technical standpoint, gold finally broke above trendline resistance of a descending channel formation dating back to the February 29th high with the precious metal closing out the week just shy of the 38.2% Fibonacci extension taken from the October 2011 and February 2012 crests at $1640. Note that the breach above channel resistance was confirmed by a break above daily RSI resistance dating back to late February with the slope of the oscillator suggesting that prices may remain well supported in the near-term. Interim daily support now rests at the 50% extension at $1590 backed by the 61.8% extension at %1545. Only a break below the May low at $1526 would negate our short-term bias with such a scenario risking substantial losses down to the $1500 mark and the 78.6% extension at $1480. Look for weakness in the greenback to keep prices afloat with the possibility for persistent dollar strength in early June trade likely to limit gold advances.-MB