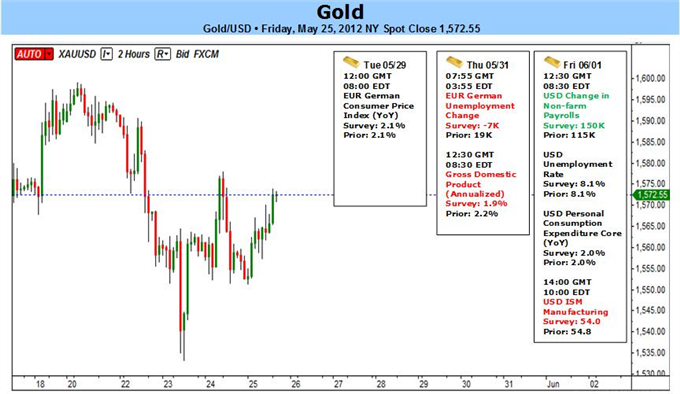 Gold was off by more than 1.25% at the close of trade this week as the precious metal consolidated below the $1600 mark. Much of the recent weakness in gold prices can be attributed to substantial appreciation in the greenback with the Dow Jones FXCM Dollar Index advancing nearly 4% for the month of May alone. Still, the metal was able to pare much of the week’s decline after data from the International Monetary Fund revealed that several central banks were looking to up their holdings of bullion. Turkey, Ukraine, Mexico, and Kazakhstan are among the nations looking to increase their supply of gold amid ongoing tensions regarding the deepening crisis in Europe.

Looking ahead to next week, investors will be closely eyeing data out of the US with consumer confidence, the preliminary 1Q GDP, and the highly anticipated non-farm payrolls on tap. Consumer confidence is expected to modestly improve for the month of May with consensus estimates calling for a read of 69.5, up from a previous print 69.2. 1Q GDP is expected to be revised lower to 1.9% from a previous read of 2.2% and the weaker growth prospects could way on Fed policy as the central bank weighs the costs of further easing. Last week’s FOMC minutes showed that while voting members remains divided on whether more easing was necessary, it seems as though the committee is moving away from its easing cycle as the economy gets on a more sustainable path. Atlanta Fed President Dennis Lockhart, who is a voting FOMC member this year, continued to talk down speculation for more easing this week, stating that the ‘bar remains high’ for another large-scale asset purchase program. Employment data is sure to steal the spotlight next week with estimates calling for non-farm payrolls to increase by 150K while the unemployment rate holds at 8.1%. Should the data fall short of expectations, look for the gold to remain well supported as the greenback comes under pressure amid speculation of further Fed easing.

From a technical standpoint, gold remains well within the confines of descending channel formation dating back to the February 29th high with the precious metal closing out the week below the 50% Fibonacci extension taken from the October 2011 and February 2012 crests at $1592. Look for a topside break of the channel (currently around April low at $1612) to exposes subsequent resistance targets at the 38.2% extension at $1640 and 200-day moving average just shy of the 23.6% extension at $1690. Interim support rests with the 61.8% extension at $1545 with a break below this level risking losses to the $1500-mark. Expect US dollar price action to heavily influence gold prices heading into the next week’s NFP print, with the data likely to offer further clarity on a directional bias. - MB