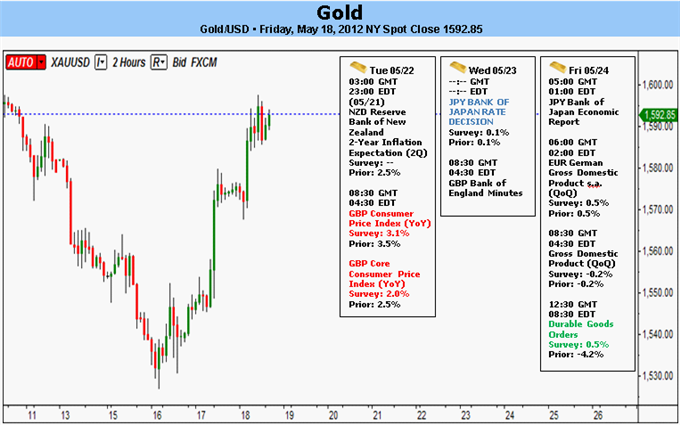 Gold prices mounted a swift recovery toward the end of last week as fears of a spreading crisis in the Eurozone and disappointing US economic news drove demand for alternative stores of value. An unexpectedly soft Philadelphia Fed print dented hopes that an accelerating US recovery will offset headwinds to global growth from sluggish conditions in Europe and Asia. The outcome marked only the second bit of significant data from the May set of activity surveys, tarnishing positive cues from the Empire Manufacturing print earlier in the week and pulling gold higher on inflation-hedge buying as traders sized up the uneven performance with minutes from the Fed’s April policy minutes. The release showed some policymakers made the case for a QE3 program in the event that growth falters.

Meanwhile, Moody’s downgraded 16 Spanish banks, citing the weak economy and mounting government debt. The announcement stoked fears that lenders in the Eurozone’s fourth-largest economy (and possibly elsewhere) may buckle as Greek-born jitters metastasize region-wide. This unearthed the possibility of another broad-based credit crisis akin to the 2008 fiasco, driving investors to seek refuge in assets of intrinsic worth that don’t necessarily rely on well-functioning financial markets to derive and maintain their value.

The week ahead presents headline event risk along both themes driving gold prices. On the US data front, the focus is on the Richmond and Kansas City Fed surveys as markets continue to expand their understanding of where world’s top economy stands in May. Expectations point to mixed results and traders will be keen to put the final outcomes in the context of last week’s news flow. The final revision of May’s University of Michigan Consumer Confidence gauge rounds out the docket. Soft readings are likely to fan the flames of QE3 speculation, driving gold higher. Scheduled remarks from the Fed’s Kocherlakota, Lockhart, Plosser and Dudley will be interpreted along the same lines.

Turning to the Eurozone, the tone for the week will be set by the G8 summit set to take place at Camp David over the weekend. Markets will be holding out hope for signs of an emerging multilateral response to ensure global financial markets are protected from contagion. The absence of concretely reassuring rhetoric is likely to add to gold’s upward momentum as a seemingly growing possibility of another market-wide rout buys demand. The preliminary set of May’s Eurozone PMI figures as well as Germany’s IFO survey of business confidence will color expectations of the degree of economic slowdown in the region. Soft outcomes will warn that sluggish performance threatens to sabotage precarious deficit-reduction efforts and amplify credit market stress. This too may prove gold-supportive if markets see the Eurozone issue as one with swelling global implications (a perception the G8 outcome is likely to establish in the near term).