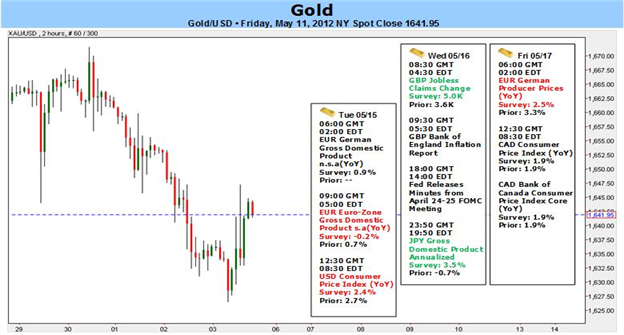 Gold ended the week off by more than 3.8% with the precious metal closing within striking distance of the 2012 lows at $1569. The classic notion of gold’s use as a safe haven play has been clearly refuted this week as prices tracked risk lower amid a broad based sell-off in equity markets. As global growth concerns continue to weigh on risk appetite, declines in broader commodity prices are likely to keep pressure on the yellow metal with platinum and silver both off by more than 4% this week while palladium posted a staggering decline of 7.6%. A breakdown in copper and crude prices have also eluded to further weakness in gold with bullion the last to top in the recent decline seen in asset prices.

Looking ahead, traders will be eyeing minutes from the April 25th FOMC meeting amid speculation that the Fed may be easing its dovish tone as the outlook for growth and inflation picks up. Remarks made by various FOMC members this week continues to suggest that the central bank may look to alter the 2014 pledge with Cleveland Fed President Sandra Pianalto highlighting an improved outlook for the US economy as she expects growth to increase by 2.5% or more this year. New York Fed President William Dudley also softened his dovish tone amid ongoing stickiness in underlying inflation with Dudley citing that the Fed will bring quantitative easing to a halt, “the moment they become inconsistent with our dual mandate objectives.” As such, it’s likely that demand for gold as a classic hedge against inflation to continue to wane with ongoing concerns regarding the deepening crisis in Europe to keep pressure on the precious metal.

From a technical standpoint, gold remains within the confines of descending channel formation dating back to the March 1st highs with the precious metal closing out the week just above the confluence of channel support and the 78.6% Fibonacci retracement taken from the December 29th advance at $1580. Subsequent downside targets are eyed at trendline support dating back to May 5th 2011, currently around $1555 and the December low at $1523. Topside resistance now stands at the April lows at $1612 backed closely by the 61.8% retracement at $1625 and channel resistance (currently at $1655). -MB