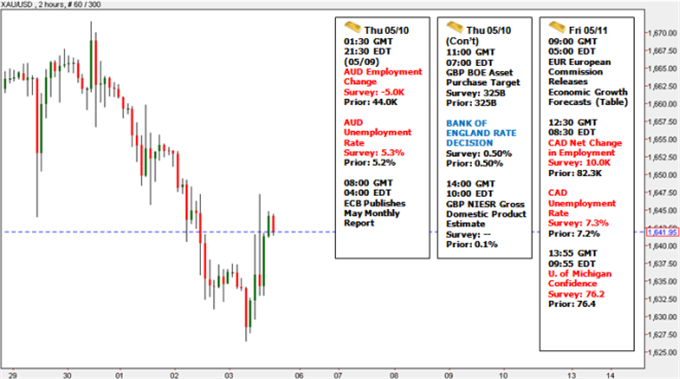 Gold ended the week off by more than 1.20% as the greenback mounted a counteroffensive early in the month and the bullion may continue to give back the advance from early this year amid a shift in the Fed’s policy outlook. Rhetoric disseminated from multiple voting FOMC members saw expectations for further Fed easing subside with demand for gold as a hedge against inflation continuing wane.

Indeed, it seems as though San Francisco Fed President John Williams is joining Dennis Lockhart and Jeffery Lacker, who all serve on the FOMC this year, as he takes note of the more robust recovery, and it seems as though the committee will continue to move away from its easing cycle this year as growth and inflation gather pace. As the fundamental outlook for the world’s largest economy improves, we may see the Fed lay out a tentative exit strategy going into the second-half of the year, and the shift in the policy outlook certainly casts a bearish forecast gold as market participants scale back speculation for QE3.

Although the April non-farm payroll report disappointed today, sending gold off the weekly lows, the impact will remain rather benign as it’s unlikely that the central bank will shift its policy on account of a single month’s print. In fact, the magnitude of the gold’s advance on the back of the print was limited despite a substantial sell-off in risk assets suggesting downside pressure on the precious metal is likely to persist. However looking ahead to next week, the single greatest impact likely to affect gold prices are remarks made by voting Fed officials with Richmond Fed president Jeffery Lacker speaking on the US economy on Monday night. While we expect to hear more hawkish comments from Lacker, remarks made by board member Sandra Pianalto on Wednesday are likely to be of particular interest. Pianalto, a known dove, may look to soften her stance after she hinted at a possible exit strategy last month with gold likely to come under pressure as the greenback continues its recent advance.

From a technical standpoint, gold remains within the confines of descending channel formation dating back to the March 1st highs with the precious metal failing an attempt at a topside breach early in the week. Gold remains in a range with daily support seen at the 61.8% Fibonacci retracement taken from the late December advance at 1624 backed by the April low and 1612 and channel support. Topside resistance stands at this week’s high at 1670, which also coincides with the 50 & 100 day moving averages, backed by the April high at 1682. A look at the broader structure sees the yellow metal consolidating into the apex of a broad wedge formation dating back to May of 2011 with prices likely to remain range-bound pending a more substantial break-out. - MB