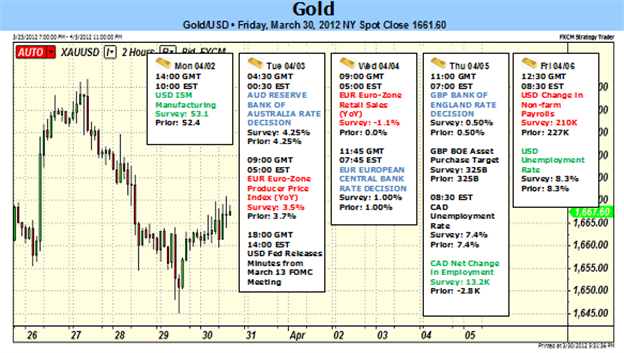 Gold Edges Higher on Bernanke - Is the Correction Complete?

Gold was modestly stronger at the close of trade on Friday with the precious metal advancing 0.21% this week. The yellow metal has largely been driven by remarks from central bankers with regards to the Fed’s current accommodative stance. Although gold has continued to hold below the $1700 barrier the threat of further easing coupled with softening economic data out of the world’s largest economy and fears of a slowdown in the Asia Pacific region may keep prices well supported in the interim.

Looking ahead, traders will be eyeing minutes from the March 13th rate decision where the accompany policy statement was notably more upbeat, making no reference to further easing from the central bank. However remarks made by Federal Reserve Chairman Ben Bernanke on Monday stoked QE3 expectations as Bernanke cited that all options remained on the table so long as the employment sector remained sluggish. The Chairman went on to note that for the unemployment rate to decline, faster domestic growth may be needed with “continued accommodative policies” likely to help support the recovery in the employment sector. While the speech was not a commitment to any further easing, it certainly supported the central bank’s current accommodative stance with the threat of additional dollar diluting measures fueling a rally in gold early in the week.

Throughout the course of the week remarks made by various Fed members have suggested that there is dissention among the board with regards to the central bank’s stance on monetary policy. Philly Fed President Charles Plosser cited increased concerns with regards to the Fed’s commitment to keep rated anchored through 2014 noting that rising oil prices are a ‘concern’ with the current policy. Plosser went on to note that the central bank may need to raise rates as soon as late 2012 or early 2013 as concerns about ‘drifting up’ inflation take root. Although Mr. Plosser is not a current voting member, the remarks suggest that central bankers remain divided with regards to future monetary policy despite the broadly dovish majority of the voting members. Should the minutes show an increasing rift within the board, look for the precious metal to come under pressure as the appeal for gold as a hedge against inflation subsides with the likelihood of a continued rally in the greenback also likely to weigh on prices.

Gold surged on Monday with an advance of 1.62% before encountering resistance at the 23.6% Fibonacci extension taken from the December 29th and March 22nd troughs at $1690. We reserve this level as our topside limit which if breached offers further conviction for gold advances. Interim support rests at $1640 with a break below the monthly low at $1627 risking substantial losses for the yellow metal. Subsequent support targets are seen at $1600 and $1540. We remain neutral on gold at these levels as the precious metal continues to consolidate below the $1700 threshold while noting that the encompassing structure of the precious metal suggests that prices may yet be propelled to all-time highs if the December low is respected. -MB