Gold at Key Support, May Bounce on Cooling US Economic Data 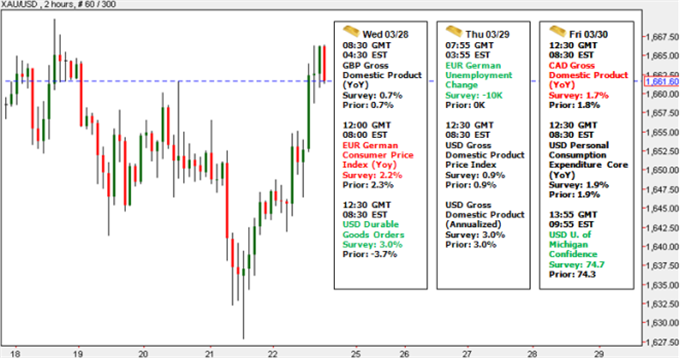 Gold prices are down 6.3 percent to date this month as the tone of US monetary policy takes a conspicuous turn away from its theretofore ultra-dovish setting. Federal Reserve officials’ public commentary began to sound noticeably rosier in late February, punctuated by Chairman Ben Bernanke’s semi-annual Congressional testimony and the March FOMC policy statement, which carried a readily-apparent upgrade to the growth outlook (albeit while keeping the commitment to keep rates low through late 2014).Not surprisingly, this dented QE3 expectations and dented demand for gold as an inflation hedge.

As we discussed in our 6-month gold forecast, the impetus for investors’ attraction to the yellow metal reflects one of two scenarios. Traders seek out gold when they fear that runaway inflation may debauch paper currencies or when worries of another market-wise collapse encourage capital flows into assets with intrinsic value that do not necessarily require properly-functioning financial markets to establish prices. With Eurozone debt crisis fears receding courtesy of the ECB’s LTRO efforts and a successful Greek PSI outing, the inflation-linked side of the argument is in focus.

Looking ahead, markets find themselves at a crossroads. The ability of US economic data to outperform relative to expectations has been slowly but steadily eroding since early February (according to data compiled by Citigroup). Although much of this likely reflects economists’ upward revisions of US recovery expectations rather than faltering growth, it nonetheless suggests that improvements in economic news may come to have less market-moving potential than we’ve grown accustomed to recently. It also hints at a growing sensitivity to negative outcomes crossing the wires against a backdrop of a now more positive outlook.

With that in mind, February’s run-up in oil prices is expected to produce some moderation in next week’s data flow. Manufacturing-sector gauges from the Dallas, Richmond and Kansas City Fed branches as well as a broader Chicago PMI regional activity gauge are expected to backpedal in March. The Conference Board’s index of US consumer confidence is also expected to pull back, although the final revision of an analogous metric from the University of Michigan is due to be revised a hair higher than originally reported. On balance, this suggests a moderation of traders’ optimism about the prospects for the US recovery is on tap.

Gold’s performance in this environment rests heavily on the ability of cooling data flow to rekindle QE3 hopes as well as its implications for the US Dollar, whose movement is a de-facto driver for the metal considering it is denominated in terms of the benchmark currency. The critical consideration for both is the tone of upcoming Fed commentary. If policymakers sound a cautious tone and stimulus expectations perk up anew as softer economic indicators cross the wires, gold will find the impetus to rebound as prices test critical long-term support. Alternatively, if officials maintain a broadly upbeat attitude, the metal will find it difficult to build a meaningful advance. Finally, the greenback remains an important haven asset, so gold’s attempt at a push higher may be undermined if the US data docket sets off market-wide risk aversion that encourages it higher. – IS