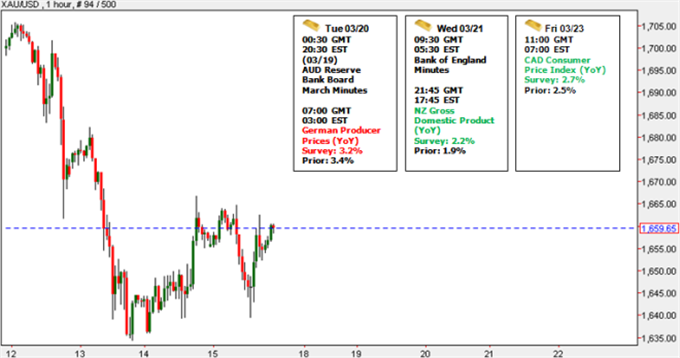 Gold was substantially weaker this week with the precious metal plummeting nearly 3.2% after an upbeat FOMC policy statement further silenced calls for another round of quantitative easing from the Fed with investors turning on the yellow metal and US Treasuries in favor of higher yielding assets. While a rally in the greenback may have contributed to the metal’s decline, a rebound off key Fibonacci resistance in the Dow Jones FXCM Dollar Index (Ticker: USDOLLAR) may be the catalyst needed to prompt a reversal in the price of gold.

On Tuesday the FOMC rate decision and accompanying policy statement offered a cautiously optimistic assessment of the domestic economy with the results of the Fed’s stress test on US banks suggesting that all but 4 of the top 19 banks held sufficient capital to be able to continue lending to households and businesses through times of severe economic and financial stresses. The news put further pressure on gold with the metal falling 1.61% on the session. With economic data continuing to improve and stronger confidence with regards to the health and capitalization of the banking sector, gold continued to decline into the close of trade on Wednesday as investors trimmed bets for further dollar diluting asset purchases from the Fed.

Looking ahead traders will be eyeing minutes from the RBA and BoE for insight into the central bank’s policy stance as equities continue to advance amid subsiding concerns regarding the European debt crisis and stronger-than-expected economic data. With the US docket rather light next week, gold broader risk trends are likely to steer gold prices with the technicals suggesting we may be approaching critical support for the yellow metal just lower as we continue to trade within a descending channel formation.

Gold broke below last week’s low at $1663 early in the week before rebounding off support at the second standard deviation Bollinger band at $1635. Interim resistance stands at the 23.6% Fibonacci retracement taken from the February 29th descent at $1670 with subsequent topside targets eyed at the 200-day moving average at 1680, and the 38.2% retracement just shy of the $1700 mark. A break below this week’s low eyes initial support targets at the 23.6% retracement taken from 2008 advance at $1628. Critical downside support rests with the trendline dating back to the 2008 lows, currently around $1600. A break below this level risks substantial losses for the precious metal with such a scenario eyeing subsequent support targets at $1440. We remain cautiously bullish on Gold at these levels noting that our medium-term bias remains weighted to the topside with a break above the 2012-high offering further conviction on our directional bias. - MB