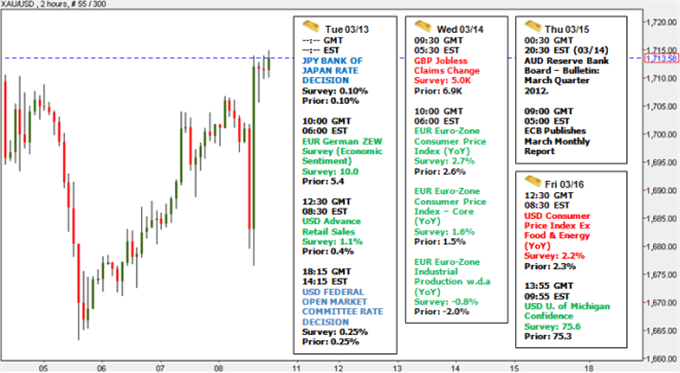 Gold closed virtually flat on the week with the precious metal off by a mere 0.09% as the dollar mounted a counteroffensive that saw the Dow Jones US Dollar Index break through key Fibonacci resistance. While the volatility in gold prices have made it increasingly difficult to forecast, the fundamentals continue to put into question advances in the metal as improving US data and a stronger dollar weigh on demand for gold as a store of wealth.

Today the ISDA (International Swaps & Derivatives Association) ruled that the Greek PSI agreement is in fact a credit event, triggering CDS’ on Greek debt holdings. With a Greek default now confirmed, concerns regarding other indebted periphery nations have started to take root with speculation circulating that Greece may have now set a precedent for Spain, Portugal and Ireland. Gold advanced on the news just ahead of the US close with the move fueling a rally that saw the metal pare losses from earlier in the week and the prices may remain well supported as investors look to diversify away from risky assets in light of this development.

Looking ahead to next week, traders will be closely eyeing the FOMC interest rate decision and accompanying monetary policy statement on Tuesday. While the Fed is likely to reiterate remarks made at last week’s semi-annual monetary policy testimony, investors will be listening for the central bank’s assessment of the economy as data has continues to top estimates with Friday’s stronger than expected non-farm payrolls employment report further supporting the argument that the recovery is gathering pace. As such, gold’s advance may be limited in the near-term as the traditional calls for the precious metal as a ‘safe haven’ and a hedge against inflation subside.

Gold has continued to trade within the confines of an ascending channel formation dating back to the December 29th lows with prices rebounding off channel support at $1663 on Wednesday. The decline off the 2012 highs at $1790 seems to have carved out a corrective 9-wave pattern with the advance over the past three days likely to be the beginnings of a 5-wave impulse rally. Interim support rests at the 38.2% Fibonacci extension taken from the November 8th and February 29th crests at $1683 backed by the March low at $1663 and the 61.8% extension at $1617. Initial topside resistance stands at the 23.6% extension at $1725 backed by $1760 and the 1790. We remain neutral on Gold at these levels noting that our medium-term bias remains weighted to the topside with a break above the 2012-high offering further conviction on our directional bias. - MB