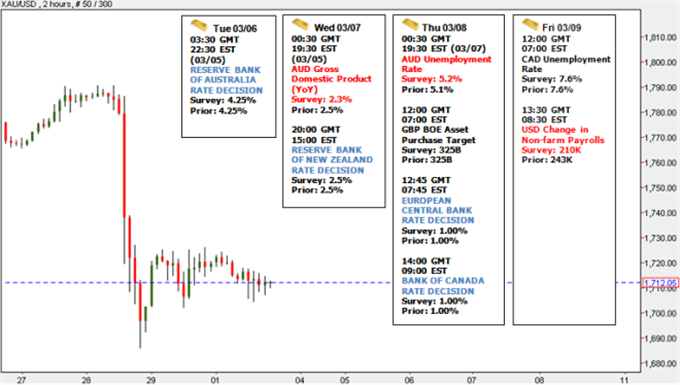 A volatile week in gold prices saw the precious metal whipsawed as remarks made by Fed Chairman Ben Bernanke saw a bout of profit taking with prices plummeting more than 5% on Wednesday. Prices closed the week lower by 3.38% on Friday with the yellow metal continuing to hold just above the $1700-mark. Has gold set an interim top? The fundamentals suggest this may be the case.

On Wednesday Federal Reserve Chairman Ben Bernanke gave his testimony before the House Financial Services Committee for the semi-annual monetary policy report. While the Chairman reiterated much of what was said at the previous monetary policy statement back on January 25th, the omission of any remarks with regards to further easing form the central bank sent risk assets lower with the dollar mounting a counteroffensive that lasted for the remainder of the week. In light of the recent rhetoric from central bank officials, the Fed could be paving the way for future normalization of monetary policy and the shift in the central bank’s tone is likely to weigh on demand for the precious as the fed looks to wind down its balance sheet.

In the week ahead, traders will be closely eyeing Friday’s much anticipated non-farm payrolls report where consensus estimates are calling for the addition of 210K jobs for the month of February, slightly weaker than the previous 243K seen in January. Should the data continue to point to a more robust domestic recovery, the rise in economic activity could spur concerns about inflation. This could in turn prompt the hawkish comments from the Fed and ultimately further support dollar strength moving forward at the expense of the precious metal. In addition, as calls for further dollar diluting quantitative easing measures subside, demand for gold as a traditional hedge against inflation could also continue to wane.

Gold was unable to clear the 100% Fibonacci extension taken from the September 26th and December 29th toughs at $1788 with prices plummeting more than $100 before encountering support at the key 61.8% extension at $1686. This level remains paramount for the precious metal with a break below eyeing subsequent support targets at the 50% extension at $1655 and the 38.2% extension at 1625. Interim resistance stands at the 78.6% extension at $1730 backed by $1760 and the 100% extension at 1788. Look for prices to continue to consolidate after Wednesday’s massive drawdown with our interim bias cautiously weighted to the downside. - MB