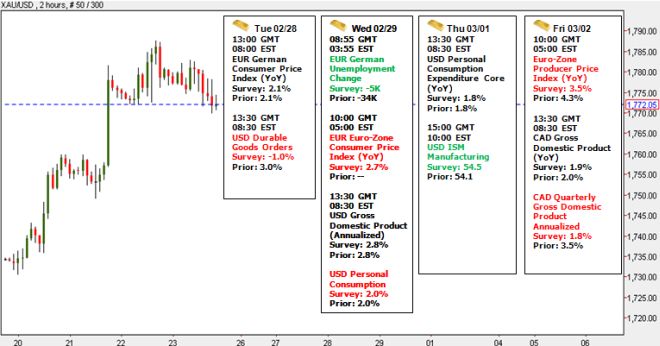 Gold has been pulled in opposing directions over recent weeks by the conflicting influence of risk appetite trends and economic fundamentals. While Eurozone sovereign risk fears dominated the spotlight, gold found itself facing de-facto selling pressure as safe-haven demand bolstered the US Dollar. When EU officials finally ironed out an agreement on the second Greek bailout package and the spotlight turned back to economic growth considerations, risk appetite recovered as the process of pricing out the threat of an imminent credit crunch played out across financial markets. This proved supportive on two fronts. First, it weighed on the US Dollar; second, it stoked inflation expectations as traders sized up the implications of a pickup in the tone of economic data against ultra-loose monetary policies pursued by most of the world’s top central banks. A replay of this dynamic is likely in the week ahead.

On the risk sentiment front, Greece returns to the spotlight as policymakers in Athens scramble to complete a long list of requirements ahead of the EU leaders’ summit beginning on Thursday to unlock the first portion of the €130 billion bailout. The clock is ticking with €14.5 billion in maturing debt set to roll over on March 20. If Greece is not able to secure funding by then, a messy default will follow. While fears of such an outcome are probably overdone considering the ECB padded EU banks’ defenses with close to €500 billion through the 3-year LTRO facility in December, the unprecedented nature of a default within the currency block is likely to trigger reflexive risk aversion. This means that at least over the near term, the emergence of any stumbling blocks separating Greece from its promised aid money is likely to jolt the US Dollar higher and pressure gold prices. Needless to say, a relatively smooth Greek funding process will probably have the opposite effect.

Meanwhile, the fundamental landscape appears relatively supportive. G10 economic data has been outperforming relative to expectations by increasingly significant margins since mid-November according to data from Citigroup. Median forecasts for key data releases from the US, the Eurozone and China (the world’s top drivers of growth) in the week ahead point to another strong outing. This is likely to drive inflation expectations higher, particularly if combined with strong uptake at the second 3-year LTRO to be held on February 28-29. Although the ECB program differs from outright quantitative easing as pursued by the Fed, the BOE and the BOJ, its aim is precisely the same. Namely, it seeks to lower borrowing costs by expanding the supply of credit with newly created liquidity. Indeed, the size of the ECB balance sheet now far outstrips that of the Fed. This means a large LTRO is likely to be viewed as relatively negative for paper assets (albeit EUR-denominated ones), compounding demand for gold as an alternative store of value.

Geopolitical jitters present a wild-card. Oil prices have been soaring courtesy of a swelling risk premium as Iran-linked supply disruption worries multiply. Recent news-flow suggests China, Japan and India – the top three buyers of Iranian crude – will substantially reduce imports amid Western pressure. Feeling increasingly isolated, Tehran might be encouraged to lash out, raising fears of an imminent conflagration that may compromise the critical Strait of Hormuz shipping lane that carries close to 40 percent of global seaborne crude supply. An oil shock (if one is to materialize) is likely to prove gold supportive, amplifying inflation expectations further still. – IS