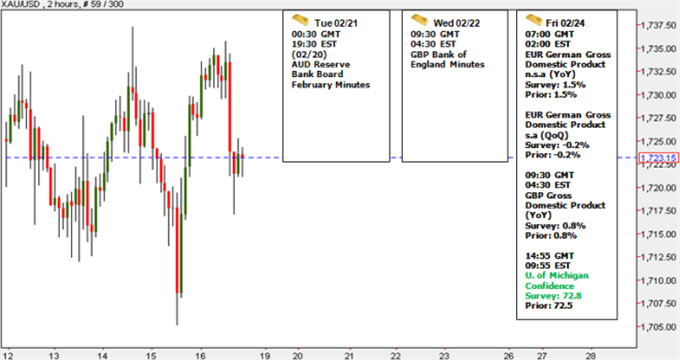 Gold was virtually unchanged at the close of trade this week with the precious metal higher by a mere 0.13% at the close of trade in New York. Over the past weeks we have often noted how gold has continued to track risk with near precision; this week was no different. With the European crisis continuing to dominate headlines, gold traders remain poised as the Greek deadline for some €14 billion in bond redemptions and paybacks in March quickly approaches.

Inflation data out of the US on Friday weighed on the precious metal which continued to whipsaw within the confines of an extremely tight range this week. The headline CPI print came in at 2.9% y/y, missing calls for a read of 2.8% y/y, but still easing from a previous read of 3.0%. However a closer examination of the data showed that the pace of growth in underlying inflation as represented by the core CPI print (ex food & energy) continued to advance with the figure hitting its highest level since September of 2008 at 2.3% y/y. Consensus estimates called for the figure to remain unchanged at 2.2% y/y with the pace of core price growth now having steadily risen since September of 2010 when core CPI fell from 0.9% y/y to 0.8% y/y.

While gold has been historically used as a hedge against inflationary pressures, the metal now stands to lose ground on rising concerns as further increases in the pace of price growth limit the Fed’s scope to implement further dollar diluting quantitative easing measures. This was evident on Friday when the dollar found support on the back of the CPI print with gold coming off nearly 0.25% on the session.

Gold held a tight range throughout the week with price action holding between the 23.6% Fibonacci retracement taken from the January advance at $1705 and $1735. A break below interim support eyes subsequent floors at the 38.2% retracement at $1670, $1640, and the key 61.8% retracement at $1615. A breach above the $1735 mark shifts the tide for gold with subsequent topside targets eyed at $1750, the February 3rd high at $1763 and the November highs at $1800. Look for broader macro trends to steer gold prices as the European debt saga continues to dominate headlines, with a broad based risk sell-off likely to weigh on gold prices in the interim as the US dollar advances. We remain neutral at these levels while noting that the medium-to-long-term outlook for gold remains weighted to the topside with prices expected to top last year’s record highs in 2012. - MB