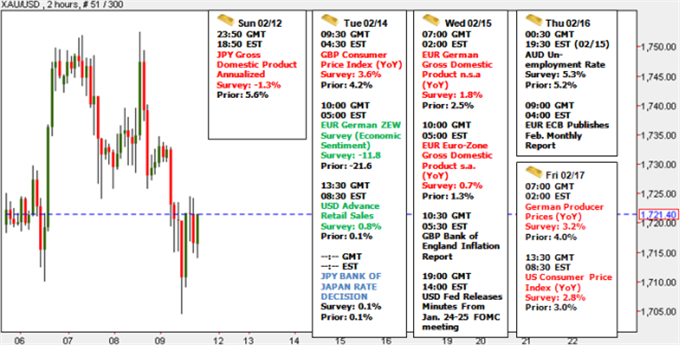 Gold was after on the week with the precious metal off by nearly 0.50% at the close of trade in New York. Year-to-date gold’s advance has eased to just under 10% with bullion holding just above the $1700 mark on Friday. Gold has continued to track risk assets for some time now, losing its common role as a haven play amid increased speculation that the Fed’s prolonged zero interest rate policy (ZIRP) would further dilute the greenback. But as the rally in risk stalls, expected strength in the dollar could start to weigh heavily on the yellow metal.

Market focus this week remained fixated on the ongoing European debt crisis as Greek officials struggled to approve the harsh austerity measures required by the Troika in order for the debt laden country to receive the next tranche of bailout funds to the tune of €130 billion. The funds are needed ahead of next month’s deadline when some €14 billion in bond redemptions and paybacks are due. However as debt talks stall, more and more investors and major institutions have now starting to factor in a possible euro-Greek decoupling as a flurry or rumors continued to circulate throughout the week. Widespread demonstrations across Athens turned violent this week as a general protest saw thousands take to the streets in opposition to the strict austerity measures proposed by the Troika draft with Greeks spotted burning German flags in an obvious act of rebellion. While gold has typically been used as a haven play for nervous investors seeking refuge, the recent run-up strikes a stark contrast with the common notion of the yellow metal as a safety trade.

The correlation between the dollar and gold with respect to the Dow Jones FXCM US Dollar Index (Ticker USDOLLAR) has started to show signs of reversing with the correlation coming off its lowest levels since 2007 at -0.70 this week. A look at historical data adds clarity to the gold outlook with the correlation moving into positive territory in early 2009 and again in 2010 amid panic sell-offs in risk as both bullion and the greenback saw massive inflows on risk aversion plays. Should broader market sentiment continue to deteriorate, look for the gold/dollar correlation to continue to strengthen with such a scenario likely to play out amid a massive wave of haven flows.

Gold pulled back from the December highs at $1763 last week with the yellow metal rebounding off the 23.6% Fibonacci retracement taken from the December 29th advance at $1705 on Friday. Interim support holds here with a break below eying subsequent floors at the 38.2% retracement at $1670, $1640, and the key 61.8% retracement at $1612. Interim resistance now stands at $1750 backed by $1763. A breach above this level negates our short-term bias with topside targets eyed at $1780 and the November highs just above the $1800 mark. Look for broader macro trends to steer gold prices as the European debt saga continues to dominate headlines, with a broad based risk sell-off likely to weigh on gold prices in the interim as the US dollar advances. Note that the medium-to-long-term outlook for gold remains weighted to the topside with prices expected to top last year’s record highs in 2012. – MB