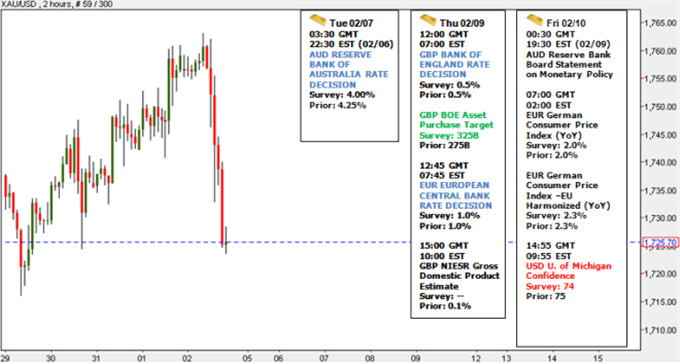 Gold was virtually unchanged on the week after the precious metal saw its largest one-month advance in January since last August. Year-to-date gold has advanced nearly 11% as the dollar came under tremendous pressure on speculation that the Fed would indeed move to implement further quantitative easing measures. However with today’s blow-out non-farm payroll figures, the recent rally may be at risk.

Non-farm payrolls rose by 243K in January, far surpassing consensus estimates for a print of just 140K with the unemployment rate falling to 8.3% from 8.5%. Later in the day the ISM non-manufacturing composite also topped estimates with a print of 56.8, its highest level since February 2011 and besting calls for a read of 53.2. The data fueled a rally in risk assets with the dollar finally finding some support as calls for additional quantitative easing from the Fed eased. Speculation that the central bank will look to further ease monetary policy surged after the FOMC rate decision last week where Chairman Bernanke pledged to keep interest rates anchored through late 2014. Accordingly gold was bid higher as investors flocked into the precious metal as a classic hedge against inflationary fears on concerns that the Fed may look to implement further dollar diluting policies to prop up the economy.

However as US economic data continues to improve, calls for easing from the Fed are likely to subside with gold risking a substantial pullback from the massive advance seen since the start of the year. As noted in last week’s gold forecast, a look at historical data suggests that the yellow metal may be in for a larger correction with two of the past three record monthly advances posting a sharp decline of 7% or more on an open-to-close basis the following month.

Looking ahead to next week, traders will be closely eying Fed Chairman Ben Bernanke as he testifies before the Senate Banking Committee. Although Bernanke is likely to reiterate the remarks made this week before the House Budget Committee, the chairman could face increased scrutiny on the back of Friday’s blow-out NFP print with members of congress likely to question the central bank’s decision to maintain its zero interest rate policy through late 2014. Should Bernanke further soften his dovish outlook on the economy, look for gold to come under pressure as the dollar finds bids with the Dow Jones FXCM Dollar Index (Ticker: USDOLLAR) resting near three month lows just above the 9700 level.

Gold encountered resistance at the December highs at $1763 before pulling back on Friday’s positive NFP print. Interim support now rests at the 61.8% Fibonacci extension taken from the September 26th and December 29th troughs at $1690 with subsequent floors seen at the 50% extension at $1658 and $1640. A breach above the December highs eyes topside targets at 100% extension at $1795 backed by $1820 and $1845. Look for gold to ease next week as QE prospects diminish with a bout of dollar strength likely to further weigh on the precious metal. Note that the medium-to-long-term outlook for gold remains weighted to the topside with prices expected to top last year’s record highs in 2012. – MB