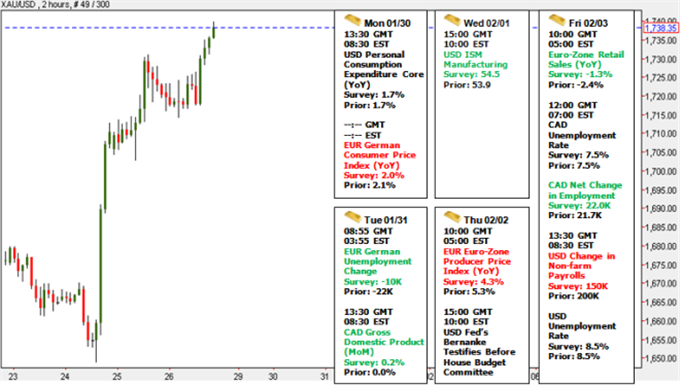 Gold prices surged this week with the precious metal advancing 4.3% on the back of the Fed’s pledge to anchor interest rates at record lows through late 2014. Year-to-date the yellow metal has now advanced nearly 11% which puts it on pace for the fourth largest monthly rally in 10 years. The last time gold posted such an advance was in August when prices surged 12.25%. Interestingly, a look at historical data suggests gold may go on the defensive next month with two of the past three record monthly advances posting a sharp decline of 7% or more on an open-to-close basis the following month. That being said, there are other economic factors at play here keeping prices buoyed with the FOMC’s decision on Wednesday shifting the tide on gold.

In the subsequent press conference after the FOMC interest rate decision, central bank chairman Ben Bernanke cited that there was a “number of factors” keeping inflation under pressure with expectations that the slowing global economy would hold down prices. However a look at core inflation prices (ex food & energy) over the past few years shows that consumer prices have remained sticky with the December core CPI data holding at its highest level since October of 2008 at 2.2%. And while headline inflation figures continue to suggest price growth remains subdued, the elevated level in core prices may continue to fuel flows into gold as a store of wealth amid a prolonged ZIRP (zero interest rate policy), further depreciation in the dollar, and concerns regarding the core rate of inflation.

Looking ahead to next week, traders will be eyeing the Henry Hawkins testimony where chairman Bernanke will speak before congress regarding the state of the economy. While Bernanke is likely to reiterate his remarks from last Wednesday’s press conference, the barrage of questions that will be posed to the chairman could bring about fresh comments on the economy with investors lending a keen ear to the testimony as the Fed maintains a dovish tone for future monetary policy. Talks of further quantitative easing are likely to keep gold well supported as Fed members continue to reaffirm markets that the central banks is ready and willing to continue to ease monetary policy should conditions deteriorate further.

Gold broke above key trendline resistance dating back to the all-time highs put in on September 6th on Wednesday after the FOMC interest rate decision with the precious metal closing out the week just above the 76.4% Fibonacci extension taken from the September 26th and December 29th troughs at $1730. Interim support rests at the 61.8% extension at $1690 backed by former trendline resistance, now acting as support. Topside targets are eyed at $1750 backed by $1780 and the 100% Extension just below the $1800-mark. Look for gold to possibly come under pressure early next week, with the prices likely to remain well supported heading into February. -MB