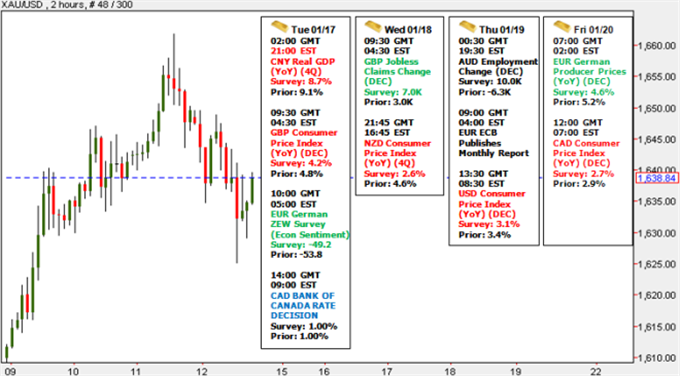 Gold advanced 1.37% this week amid a rally in stocks as US data continues to suggest the domestic recovery remains on proper footing. The Fed’s Beige Book released on Thursday reinforced recent economic data with the twelve Fed districts citing “modest to moderate” economic growth. As the outlook for the US continues to improve, the dollar is likely to slowly decouple from its inverse relationship with the equities with gold likely to come under pressure in the interim. Year-to-date, the yellow metal has already advanced more than 4.7% with prices likely to consolidate early next week.

As often cited by analysts across the spectrum, throughout history gold has typically been the play of choice as a hedge against inflation. With inflation not an immediate concern at this time and stronger than expected US data continuing to top estimates, investors seeking refuge from the ongoing turmoil in Europe instead have turned to the greenback. And while strength in the dollar typically weighs on the precious metal, new speculation that the Fed may look to implement another round of quantitative easing may once again ignite a rally in bullion. Several voting Fed members have continued to cite concerns over domestic growth with St Louis Fed Chief James Bullard noting that European pressures could weigh on the US recovery while highlighting that QE was the central bank’s, “most potent weapon.” Remarks made by other known Fed doves like Charles Evans and Jeffery Lacker have also suggested that a growing rift within the central bank may favor further easing as the European debt crisis continues to threaten global growth prospects.

The correlation between gold and the S&P is nearing extremes last seen in November of 2010 with the current correlation holding at 0.66. Since late October when the correlation flipped to positive, the precious metal has continued to track equities rather well as concerns about further dollar diluting quantitative easing measures from the Fed took root. But with the new board of voting Fed members highly weighted on the dovish side, calls for further easing could see gold’s appeal increase. That said, the gold trade remains quit speculative at this point with our bias remaining neutral at these levels.

Next week traders will be closely eyeing inflation data out of the US with consensus estimates calling for a CPI print of 3.1% y/y, down from a previous read of 3.4% y/y. Producer prices are expected to show similar results with estimates calling for a print of 5.1% y/y, down from 5.7% y/y. Should inflation remains well anchored, gold could continue to consolidate within its recent range between $1660 and $1550 as investors look to the Fed for signals on whether the central bank will look to embark on another round of quantitative easing.

Interim support rests at the 38.2% Fibonacci extension taken from the September 26th and December 29th troughs at $1625. Subsequent floors are seen at $1600, the 23.6% extension at $1585 and $1550. Topside resistance holds with the 50% Fibonacci extension at $1660 backed by $1675 and key 61.8% extension just shy of the $1700 mark. A break above this level would signify a breach above trendline resistance dating back to the all-time highs put in on September 6th with such a scenario shifting our neutral bias to bullish. -MB