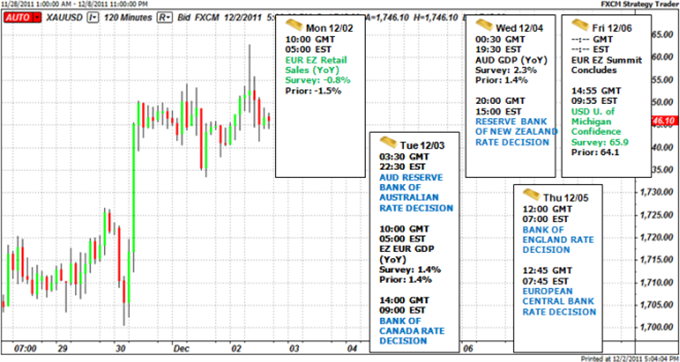 Gold closed the week higher by 3.67% against the dollar as markets rallied on news that central banks had coordinated to lower swap rates in an attempt to ensure free flowing liquidity amid rising tensions over Europe’s debt crisis. The precious metal has failed to act as a “haven” amid growing global uncertainty with the gold / S&P correlation flipping to positive since the start of the November. Prior to that, gold had maintained an inverse relation with overall risk trends since early July when inflation concerns and dollar diluting policies from the Federal reserve saw traders flock into bullion as a hedge against the threat of inflation.

The advance comes on the back of a two week losing streak that saw prices dip as low as $1,666 with the metal tracking equity markets lower as global growth concerns weighed on broader risk sentiment. Supporting this week’s rally was not only a decline in the dollar, which gold is priced in, but also central bank buying. The latest central bank to tap the gold market is South Korea which is reported to have purchased 15 tons of the yellow metal for $$850 million in November. The move comes on the heels of purchases in June and July when it purchased 25 tons for a reported $1.24 billion which marked the nation’s first large scalp gold purchase in more than ten years. Other sovereigns such as Russia, Thailand, and Bolivia have already disclosed gold purchases as officials continue to seek the precious metal as a defensive play. With more than 148 tons of purchases in the third quarter alone, central banks are now on track to buy more gold than in any time period over the past 40years since the collapse of the Bretton Woods system.

Looking ahead, gold traders will be closely eyeing a slew of central bank rate decisions from the RBA, BoC, BoE, RBNZ, and the ECB ahead of Friday’s crucial EU summit where German Chancellor Angela Merkel and French President Nicolas Sarkozy are expected to release a comprehensive plan to “overhaul” the structure of the euro zone. If markets react favorably to next week’s events, the precious metal is likely to come off as investors aggressively chase yields on eased debt concerns despite the fact that gold has continued to track equities over the past few weeks. Accordingly the yellow metal could see a break of this positive correlation should markets aggressively turn bearish on risk. And although increased speculation in the precious metal may have contributed to the recent decoupling in its classic “haven” status, ongoing fears about debt contagion in Europe are likely to see investors once again seek safety in bullion as yields on sovereign debt around the region continue to climb.

Gold ends the week just below long standing trendline resistance dating back to the September all-time highs at $1,920 with price action rebounding off the trendline to close at $1,745. The precious metal continues to trade within the confines of a wedge formation with interim resistance holding at $1,750. A breach of this level eyes topside targets at the 50% Fibonacci extension taken from the October 20th and November 21st troughs at $1,765, the 61.8% extension at $1,787, and the key psychological $1,800 mark. Interim support rests at the 38.2% extension at $1,741 with subsequent floors seen at $1,725 and $1,700. Look for gold to maintain its current range with price action taking cues off developments from next week’s jam packed economic docket. -MB