Gold Rebound May Gather Pace As Speculation For QE3 Resurface 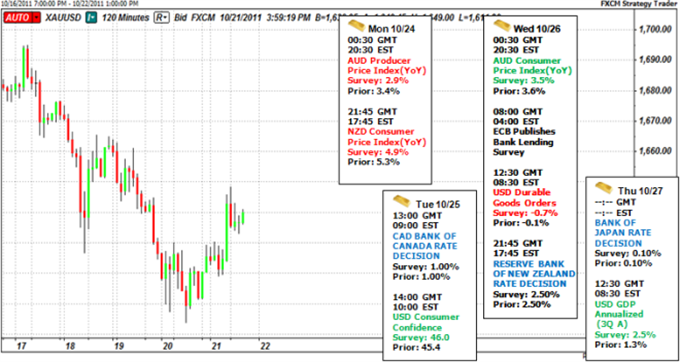 Gold pared the decline from earlier this week, with spot prices bouncing back from a low of $1,604/oz, and the bullion may continue to retrace the sharp decline from the record-high ($1,921/oz) as market participants diversify away from the U.S. dollar. As the Federal Reserve floats the idea of expanding its balance sheet further, increased speculation for another round of quantitative easing instills a bearish outlook for the reserve currency, and the greenback may continue to trade heavy over the following week should the central bank see scope to carry its easing cycle into the following year.

Indeed, comments from FOMC board member Daniel Tarullo renewed speculation for QE3 as he urged the committee to consider additional asset purchases, and the Fed may keep the door open to expand monetary policy further as the slowing recovery heightens the risk of a double-dip recession. At the same time, St. Louis Fed President James Bullard said more quantitative easing could be in the pipelines should economic conditions deteriorate further, but went onto say that he’s hesitant to ease monetary policy further given the stickiness in price growth. Minneapolis Fed President Narayana Kocherlakota held a similar view, stating that the last two actions taken by the FOMC is inconsistent with the economic developments, and warned that the outlook for inflation has ‘risen markedly’ since the Fed bought $600B in mortgage-backed securities back in November 2008. In turn, Mr. Kocherlakota argued that the ‘committee should have lowered the level of monetary accommodation over the course of the year’ as he expects inflation to hold above the 2 percent target over the medium-term. Adding to the mix, Fed Chairman Ben Bernanke stated that the central bank has no plans to ease monetary policy further according to a meeting with Senate Democrats, and noted that monetary policy may have reached its limit in stimulating the ailing economy.

As a result, the small rebound in Gold may be short-lived should the central bank continue to talk down expectations for QE3, and we may see the previous metal threaten the long-term uptrend as the Fed starts to soften its dovish outlook for monetary policy. The growing rift within the central bank may spur a bullish bias for the USD, and the bullion may give back the rebound from the previous month ($1,533/oz) as market participants scale back speculation for further easing. However, the recent weakness in the greenback may carry into the following week as the Fed maintains a cautious outlook for the world’s largest economy, and Gold prices may push back above $1,700/oz as investors look for an alternative to the reserve currency. - DS