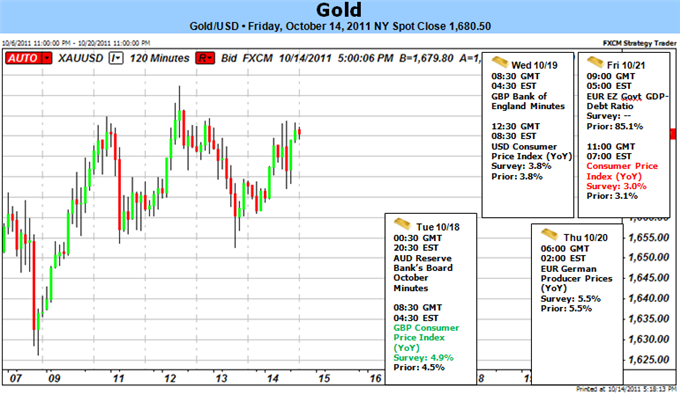 Gold had a decent week despite underperforming the speculative commodity currencies, gaining 2.63 percent against the U.S. Dollar. The precious metal closed in closer to the $1700.00 per ounce mark again, finishing the week at $1680.96 at market close on Friday. Although Bullion continues to trade off of its all-time high of $1921.17, which it reached back on September 6, it’s clear that market participants are actively bidding up the precious metal, as well as other commodities, in the face of further liquidity in the system.

The week ahead could provide kind to bullion once more on both a fundamental and technical basis. Fundamentally, there a few events on the docket which are likely to boost the appeal of Gold as an alternative to the fiat currencies. First, starting today on Friday, G-20 finance ministers started meeting in Paris to discuss ways to stem the debt crisis in Europe. A recapitalization of European banks and injecting further liquidity in the system to prevent a credit crunch are among the top priorities. This will affect gold two-fold. Primarily, additional liquidity in the system reduces the value of fiat currencies, boosting gold’s appeal as an alternative investment. Secondly, if Europe is able to contain a Greek default – a deflationary event as it would suck credit out of the system amid write-downs – speculators will likely jump in and begin bidding gold higher once more as a hedge against future downturns in the economy.

In terms of substantive data to examine, perhaps the most important event on the docket this week is the release of the consumer price index for the United States, the predominant measure of inflation. According to a Bloomberg News survey, economists forecast U.S. consumer price index tocontinue to show signs of pressure, with the median estimate calling for a 0.3 percent gain in September, on a monthly basis. Year-over-year, the index is expected to show that price pressures held at 3.8 percent in October, the same level in August. As the headline figure for inflation, reflecting a decline in the purchasing power of the dollar. Should inflation tick higher, gold will find bids as it has traditionally been a store of value when price pressures rise.

Gold has been consolidating into the apex of a triangle formation dating back to the recent September low, with a the precious metal eyeing an imminent breakout early next week. Interim resistance is eyed at the 38.2% Fibonacci retracement taken from the decline off all-time highs at $1680 with subsequent ceilings seen at $1700 and the 61.8% retracement at $1770. A break below trendline support eyes targets at the 23.6% retracement at $1625 followed by $1600 and $1580. A break below this level risks significant losses for the yellow metal with subsequent floors seen $1560 and the September 26th low at $1532. –CV