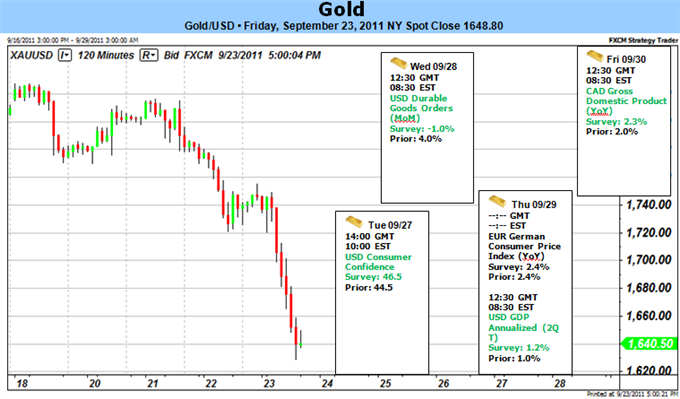 Gold plummeted nearly 9% this week as sharp declines in equity markets fueled haven flows into the dollar. The FOMC rate decision on Wednesday saw the Fed announce the purchase $400 billion in long-term debt in an operation dubbed by market participants as ‘operation twist.’ The move aims to combat “significant downside risks” to the economy while keeping the size of the central bank’s balance sheet unchanged. To offset the cost the bank will sell the same amount in short-term treasuries and looks to flatten the yield curve by lowering interest rates on longer-term maturities. However the announcement was not well received and investors jettisoned risk across asset classes with gold falling on rapid appreciation in the greenback.

The US economic docket is highlighted by consumer confidence, durable goods orders, 2Q GDP, and personal consumption / income/ spending data. As concerns about a slide back into recession take root, investors will be closely eying the data after the recent string of disappointing prints seen in September. Although consumer confidence data is expected to improve with a print of 46.2 from 44.5, income and spending are expected to show continued weakness and could further fuel recession fears. August personal income is expected to print at 0.1%, down from a previous read of 0.3%, while spending is expected print at 0.2% from a previous read of 0.8%. If wage growth continues to show signs of exhaustion with inflation expectations well rooted the Fed may see scope to expand monetary stimulus after markets seemingly rejected the central bank’s decision to implement ‘operation twist.’

The correction seen in gold this week comes on the back of broad based losses in the commodity sector with silver, copper and nickel plummeting on concerns that policy makers lack the tools necessary to avert another global recession. In comparison with silver’s 24% decline and platinum’s 11% decline, gold has actually faired rather well. And if data out of the US continues to show signs of a weakening economy, investors may favor gold over the greenback back as a store of value. Traders will be looking to comments from central bankers and finance ministers after the annual meetings of the IMF and World Bank in Washington today for an economic outlook on global growth. Despite gold’s recent decline the precious metal may see a rebound should recessionary fears persist with the longer term outlook still weighted to the topside.

From a technical standpoint, gold has broken several significant levels during its descent this week after dipping below the 50% Fibonacci retracement taken from the July 1st advance to the September 6th crest at $1700. Interim support for the precious metal now stands at $1630 with subsequent floors eyed at $1600 and the 76.4% Fibonacci retracement at $1585. A break back above interim resistance at $1680 eyes topside targets at $1700 backed by $1720 and the 38.2% retracement at $1750. -MB