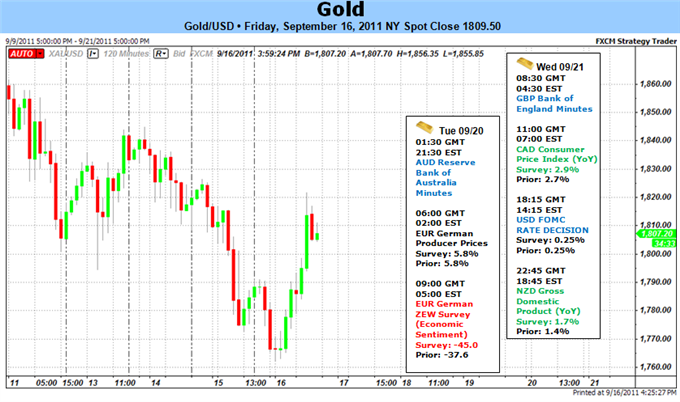 Gold fell 2.46% against the greenback this week as global equity markets rallied on optimism that European officials will be able to avert a Greek default. Sentiment remains fragile however as increased volatility in financial markets and uncertainties about future growth prospects persist. Data out of the world’s largest economy fueled ongoing concerns about the health of the domestic economy. Retail sales, business inventories, empire manufacturing, weekly jobless and the Philadelphia Fed survey all missed consensus estimates, reinforcing the argument for the fed to implement further easing measures. Inflation figures also sent up red flags after August CPI printed at 3.8% y/y, missing calls for a read of 3.6% y/y. Despite the poor economic data, markets rallied as participants remain focused on the ongoing debt crisis unfolding in Europe.

The week was a volatile one for gold with the precious metal sliding to a three-week low on Friday at $1762.40. Investors closed out long positions early in the week after newswires reported that the ECB had coordinated with the BoE, the Fed, the BoJ, and the SNB to implement measures ensuring adequate liquidity to the financial sector. Fears of an imminent credit crunch have abated, but the crisis in Europe is far from over as leaders have yet to come up with a concrete plan to address the structural and systematic financial problems in the region. Therefore it is likely that investors will continue to seek gold as a store of value in times of uncertainty.

Much of Gold’s price action will hinge on the FOMC policy meeting next week where traders will be lending a keen ear to Fed Chairman Ben Bernanke for insight regarding the fed’s future policy stance and whether voting members see scope for another round of quantitative easing. If Bernanke hints of further easing, the dollar will likely come under pressure with gold expected to move higher as investors look to hedge against inflation and depreciation in the greenback. However if the Fed strikes a more balanced tone and continues to operate on a wait-and-see approach, gold may continue to slide as traders seek more aggressive yields elsewhere. In short, gold will likely see further advances if the Fed decides to expand its monetary easing policy or if the situation in the Euro zone escalates. Both scenarios would trigger haven flows as investors look for safer places to park cash.

From a technical standpoint, gold has reached a critical level after a strong rebound off of the $1765 support level on Friday in New York. The precious metal now rests just below the convergence of trendline resistance and the key 61.8% Fibonacci extension taken from the August 12th and 25th troughs at $1820. A topside break here eyes targets at $1840, $1870, and $1900. Interim support now rests at $1800 with subsequent floors seen at $1775 and $1760. A break below this level sees accelerated losses for the yellow metal, noting support farther down at $1730 and $1710. –MB