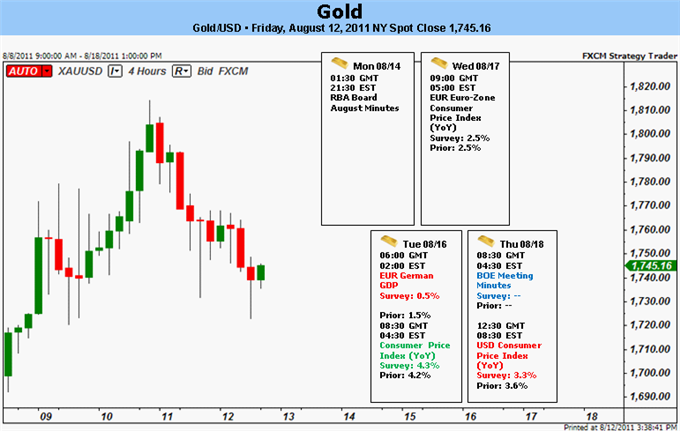 Gold Pullback May Mark the Beginning of a Larger Down Trend

Gold prices thrived as fears of a double-dip global recession began to circulate around financial markets amid increasingly overt signs of simultaneously slowing growth in all of the major hubs driving the recovery (China, the EU and the US). The extent of forthcoming downturn is difficult to predict, but its likelihood is increasingly a foregone conclusion. While uncertainty about the severity of what is ahead continues to linger, the yellow metal is likely to continue finding ample demand. Still, a corrective decline seems likely over the short term as risky assets recover deeply oversold conditions. That decline could turn into something more profound if renewed risk aversion is matched by a less than hysterical evaluation of the macroeconomic landscape.

As we have pointed out on numerous occasions, gold has flourished when investors’ expectations of the post-2008 recovery hit sentiment extremes. For those expecting a brisk rebound (the so-called “V-shaped” recovery), gold was an attractive store of value amid fears that inflation would spiral out of central bankers’ control and debauch paper currencies. On the other side of the spectrum, gold looked equally attractive and also for store-of-value reasons, except they reasoned that stimulus efforts would amount to little more than a temporary reprieve and predicted renewed turmoil that would see “paper” assets collapse anew. Clearly, the bearish position has the ear of the markets at the moment, and gold prices have obeyed with an aggressive push to the $1800/oz figure.

Sizing up the near-term outlook for the yellow metal, a pullback seems in order. Stocks and other key growth-geared assets (such as crude oil, for example) dropped very quickly over the past two weeks, leaving the markets in deeply oversold territory. A healthy, sustainable move lower that reflects a reasonable re-pricing of economic growth expectations for the remainder of the year will need a corrective rally that attracts new sellers and thereby perpetuates the decline. In fact, the foundation for such a move seems to have been laid already, with the benchmark S&P 500 stock index little changed after a week of whipsaw volatility having shown much greater bearish directional conviction in second half of July. As stocks recover, the safe haven demand will ebb and gold prices ought to give up some of their recent gains.

The larger question going forward is whether the near-term pullback could be the beginning of something larger. Indeed, the metal needs a very particular kind of stocks selloff – an outright panic as we saw over the past two weeks – to be found compelling under the bearish scenario we’ve outlined. If the months ahead bring a slowdown that reflects the malaise still plaguing the global economy and, in the absence of stimulus the wherewithal for which is now greatly diminished at the fiscal and monetary level, brings a recovery of the grinding slog variety, gold ought to find little favor. In such a scenario, even modestly yielding assets like Treasury bonds will be more compelling than gold, which offers no income stream whatsoever. It remains to be seen however if such a view – however likely its assertions – is able to take root before the short-term bounce runs its course, meaning another leg up in the gold rally is not out of the question.