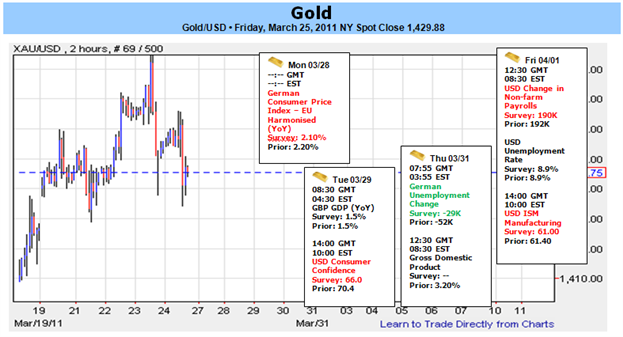 Gold was little changed for the second consecutive week, gaining 0.8 percent to $1429.88, though not before hitting an all-time high of $1447.73 on Thursday. It appeared that investors were ready to continue hoarding the precious metal, especially considering the rising tensions in the Middle East and North Africa, as contagion spread to Syria, Yemen, and Israel. A stronger U.S. Dollar suppressed the value of bullion headed into Friday, as the Greenback rallied against the Euro following commentary out of the European Union Summit, and hawkish commentary from the Federal Reserve’s Charles Plosser, who suggested that the FOMC would begin to drain liquidity and raise rates, thus boosting the value of the Greenback. Nonetheless, a dip below $1420 looks unlikely as geopolitical tension continue to increase in the weeks ahead.

The week ahead, fundamentally, should continue to propelthe precious metal higher, as investors continue to seek haven from renewed assets amid perpetually rising tensions in the MeNa region. Despite the ‘ceasefire’ the pro-Gaddafi forces ‘agreed’ to last week, clashes continued between the Libyan army, rebel forces, and the NATO coalition.As I noted last week, “any further tensions will almost certainly validate military occupation by a coalition of Western governments, which would send the price of gold even higher”;this certainly contributed to the appreciation seen over the week. Rising tensions in Israel, Syria, and Yemen contribute to this sentiment.

The data last week supported a rally for gold, and with no signs that tensions are going to abate in the MeNa region, data this week should do the same. Despite rate hike expectations falling off for the Bank of England, they are indeed rising for the FOMC given recent commentary by policymakers. A fall in U.S. consumer confidence could send American investors heading towards precious metals as a safe haven – from economic uncertainty and from rising inflationary pressures. A flight away from the Greenback on deteriorating confidence will push the value of all precious metals higher, on a nominal basis.

On a technical basis, the pair bounced off 20-SMA, and has continued within an ascending channel which has been in place since the turn of the year. The RSI on the daily chart, after falling sharply the past two weeks, has moderately risen since last week, though remains below overbought levels, suggesting further gains in the week ahead as the recent corrective wave is, in fact, completed. The next leg higher, given continued stress on the markets, could send the pair to new highs established this week. The rate of pace at which gold is accelerating has also slowed, with the Slow Stochastic oscillator issuing a sell signal, with the %K turning lower than the %D this week, at 73 and 82, respectively. To this end, the MACD Histogram is tailing off of its bearish divergence; the differential just turned positive once more. A break above the all-time high of $1447.88 could lead to a test of the range top at $1460. Technically, the picture is skewed, though given the fundamental backdrop, gains could be on the horizon regardless of recent price action. -CV