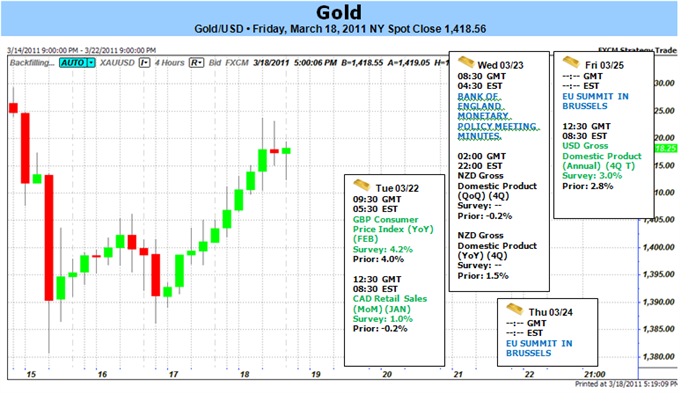 Gold was little changed on the week, gaining 0.1 percent to $1418.56, ensuring that the precious metal would not fall for the second consecutive week. It appeared that investors were ready to sell-off their bullion holdings, with the precious metal falling below $1385.00. Nonetheless, as markets refocused on the geopolitical tensions in the Middle East and North Africa, gold found support and retraced its losses in the early part of the week.

The week ahead, fundamentally, should propagate bullish momentum for gold as investors seek haven from risky assets amid renewed political tensions in the MeNa region. After it became clear that the United Nations would implement a ‘No-Fly Zone’ over Libya, pro-Gaddafi forces announced a ceasefire. With pro-government forces now forced to cool their aggression, any further tensions will almost certainly validate military occupation by a coalition of Western governments, which would send the price of gold even higher. Similarly, continued unrest in Bahrain should also be monitored, as violence has been wrought upon protestors at an alarming rate in recent days.

The data expected in the days ahead will prove to make or break gold in the coming week, should tensions in the MeNa region relax for the time being. British inflation data due Monday could necessitate a rate hike in the coming months from the Bank of England, which has been stepping up its hawkish rhetoric over the past few weeks. With the central bank’s minutes from their most recent policy meeting expected mid-week, any signs of rising price pressure concerns will trigger a flight to bullion as a hedge against inflation. The EU summit at the end of the week will also be in focus, as any progress made on sovereign debt concerns would boost investor sentiment regarding the Euro, pushing the U.S. dollar lower. A flight away from the greenback will push the value of all precious metals higher, on a nominal basis.

On a technical basis, the pair bounced off of its range bottom, and 50-SMA, of an ascending channel which has been in place since the turn of the year. The RSI on the daily chart, after falling sharply the past two weeks, has once again turned to the upside, suggesting further gains as the most recent corrective wave appears to have been completed. The rate of pace at which gold is accelerating has also increased, with the Slow Stochastic oscillator issuing a buy signal, with the %K turning higher than the %D this week, at 41 and 35, respectively. To this end, the MACD Histogram is tailing off of its bearish divergence; when the differential becomes positive, bullish momentum is confirmed. A break above the all-time high of $1445.85 could lead to a test of the range top at $1460. -CV