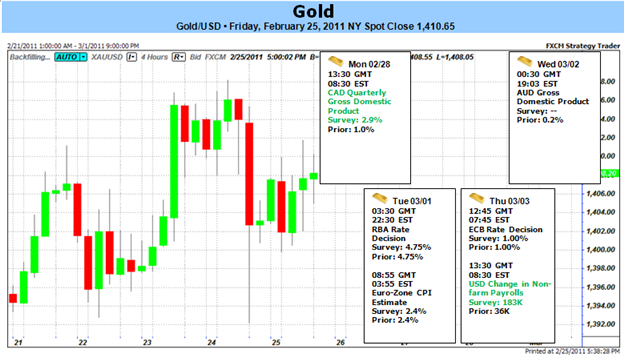 Gold extended its three week advance and now looks poised to continue its northern journey as Middle East/North Africa protests and retaliation amongst the government lead traders to seek safety, which is positive for the yellow metal. Of particular concern are the developments in Libya, and now growing concern in Iraq. As fears continue to gather pace, market participants should not rule out the bullion testing $1430/oz.

This past week, gold broke above its key resistance area of $1400 as army colonels in Libya aim to halt Mr. Qaddafi’s 42 year reign. According to Human Rights Watch, at least 300 people have been killed in the 11 days of violence and the number is expected to rise further as protests seem unlikely to calm, while Mr. Qaddafi vowed that he will fight the protests until his “last drop of blood.” The developments are worrisome not only for the fact that they look poised to gather pace, but also because protests could spread to countries like Saudi Arabia. It is important to attribute and note the recent rise in oil and gold to the possibility of protests spreading to Saudi Arabia due to the fact that the energy rich country is a key supplier of oil to countries like the U.S. Going forward, so long as tensions remain in the spotlight, contagion fears will linger and gold could witness further buying pressure as trader’s hedge against the declines in the other assets.

Meanwhile, debt fears in the 17 member euro area are deepening, adding confirmation to my bullish gold outlook. As of late, the yield on Portugal’s, Spain’s, and Greek 10 year notes are up 6bp (7.31 percent), 1bp (5.34 percent), and 4bp (11.60 percent) respectively. The increase in yields should not be overlooked alongside the increase in credit default swaps because these concerns are poised to return to top headlines in financial news soon. With regards to credit default swaps, insurance against a default in Greece stands at 944.21, marking its highest level since early January, while insurance against Spanish, Portuguese, and Irish debt extend their advance. As the troubled economy runs out of options, leaders are pushing EU leaders to adopt a new crisis measurement at its summit next month. Failure to meet market expectations will not only send the euro into a free fall, but will also lead gold to push higher.

Key events next week that will have an influence on gold prices will be the European, Canadian, and Australian Central Bank rate decision’s in addition to U.S. nonfarm payrolls. Dovish statements by policy makers paired with a dismal employment report in the world’s largest economy could lead the yellow metal higher. Taking a look at price action, market participants could witness further gains so long as downside risks remain capped by $1393/oz. -MW