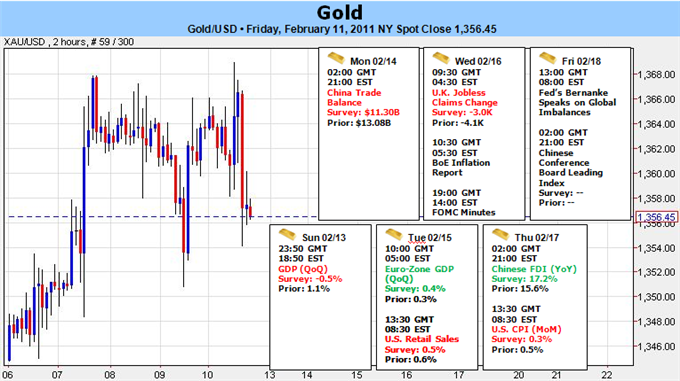 Gold to Resume Decline as Focus Shifts Away from Egypt

The rapid decline in gold prices from the beginning of 2011 stalled in the final week of January, with the metal mounting a meek recovery over the past two weeks. The timing of the rebound aligns with the beginning of the crisis in Egypt, hinting bearish momentum was arrested by geopolitically driven safe-haven demand. A newly rebuilt inverse correlation between gold and VIX index of S&P options volatility (the markets’ standby “fear” gauge) reinforces this hypothesis. With Egyptian President Hosni Mubarak finally bowing to protesters and ceding power to the military on Friday – an outcome that was greeted by the markets with a sharp drop in Egyptian CDS spreads – gold selling is poised to resume.

Gold prices had decoupled from the risk on/off dichotomy that ruled financial markets in the aftermath of the 2008 meltdown, with the metal managing to remain well-supported throughout. This reflected the prevalence of “extreme” bullish or bearish views on the pace of the global recovery, both of which saw gold as an attractive store of value. For the bulls, the central fear was and is inflation. In their scenario, a rapid snap-back in global growth would see central banks unable to reverse ultra-loose monetary policies fast enough to avoid a rapid appreciation in price growth, debauching paper currencies and making a hard asset store of value like gold a very attractive alternative. Meanwhile, the bears didn’t believe that mounds of fiscal stimulus would amount to more than a temporary reprieve, forecasting the recovery would fail as governments withdrew support. This would see the spectrum of paper assets “artificially” buoyed by said stimulus collapse anew, highlighting gold’s attraction as a tangible store of value once more.

On balance, this has meant that the most reliable long-term driver of the yellow metal has been the trend in gold ETF holdings, a proxy for overall investment demand. For their part, holdings have been falling precipitously over recent weeks to hit the lowest since June 2010 as the markets’ consensus outlook on the pace of economic recovery noticeably shifted from previously held bullish and bearish extremes toward a more moderate position. This seems reasonable: US economic data – the bellwether for the globe at large – has materially improved over recent months, suggesting a backslide into recession is unlikely; meanwhile, the lingering debt crisis in Europe and a looming slowdown in China suggest the move back to pre-crisis prosperity will be a prolonged affair rather than a quick surge higher. On balance, this robs gold of its top bullish catalysts and hints the selloff that began just as ETF holding topped out in late December will resume as the spotlight shifts away from the fiasco in Egypt.