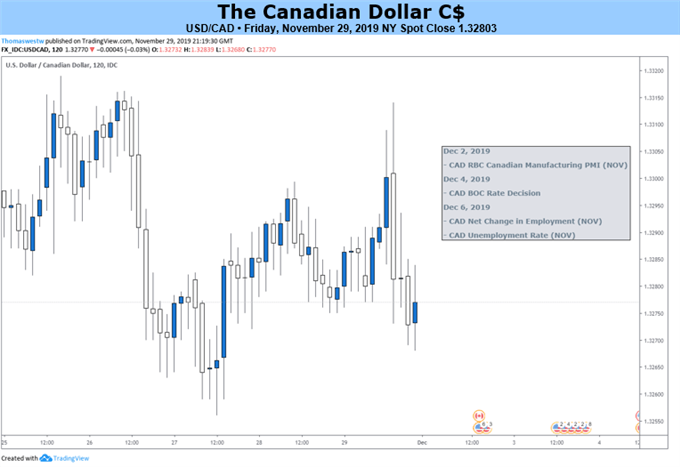 Bank of Canada Rate Decision: What to Expect

While policymakers are expected to hold the benchmark interest rate at 1.75 percent, commentary from BOC Governor Stephen Poloz on the outlook may inspire a Canadian Dollar selloff if it radiates dovish undertones. Overnight index swaps show a relatively modest probability of a rate cut next year, with the closest one in July. However, growing fundamental risks could bring the timeline for easing closer.

However, it should be noted that dovish expectations have been mounting. Year-to-date, there has been a significant downward shift in market implied policy rates across various tenors. By no sheer coincidence, the perceived urgency to cut rates back then versus now is notably greater amid shaky global growth prospects and geopolitical uncertainties.

The Canadian labor market remains tight with the unemployment rate continuing to decline while the participation rate remains broadly unchanged for most of 2019. Resilience in the services sector has given BOC policymakers impetus to hold rates despite the contraction in manufacturing. Though the trend of slowing industrial growth is not specific to Canada; this is a global phenomenon in large due to the trade war.

US-China Trade War: Is the Worst Yet to Come?

On Wednesday, US President Donald Trump announced that he signed the Hong Kong Rights and Democracy Act, a controversial bill that may derail US-China trade talks. The legislation stipulates that the US conducts yearly reviews to ensue the sovereign integrity of Hong Kong’s autonomy. The bill also allows Washington to sanction Chinese officials if it finds they are undermining the special administrative region’s sovereignty.

In October, after the US House almost uniformly voted for the measure, Beijing expressed its displeasure and immediately responded that it would use “unspecified countermeasures” if it is signed into law. One possible tool it has at disposal is the right to slap over $3 billion worth of tariffs against the US following a WTO case from an Obama-era dispute that ruled in Beijing’s favor.

If China chooses to use it, hopes of ratifying a “phase 1” agreement in their multi-sequential trade agreement with the US may almost completely dissolve. Market optimism would likely recede along with demand for the petroleum-linked Canadian Dollar. The selloff in CAD may also be magnified by a rise in BOC rate cut expectations from the prospect of deteriorating fundamentals that require more accommodative policies.