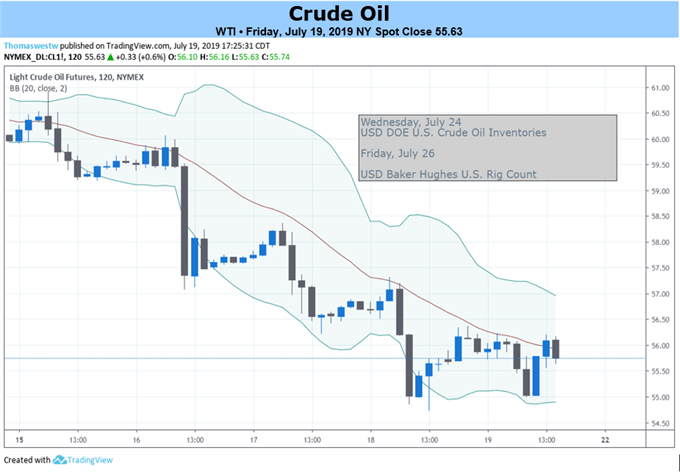 Get the latest crude oil forecast to see what will drive prices in the third quarter!

Short-term volatility aside, this has been a driving narrative for some time. The JPMorgan PMI gauge of global economic activity growth peaked in February 2018 and has trended lower since. Not surprisingly, an IEA measure of worldwide crude demand topped along with prices a mere seven months thereafter.

The recent renewal of an OPEC-led supply cut scheme has not noticeably helped. That is not surprising. Prices were likewise unimpressed when the arrangement was previously refreshed in late 2018 and only began a lasting rebound when growing Fed rate cut speculation buoyed broader risk appetite.

The week ahead seemingly offers ample fodder for the selloff to continue. The IMF is likely to downgrade its global economic performance forecasts, an ECB policy announcement is expected to set the stage for easing amid the slowdown, and US GDP growth is seen hitting a three-year low in the second quarter.

A steady stream of high-profile corporate earnings releases might add to downside pressure. Bottom-line results have topped forecasts by an average of nearly 5 percent thus far in the second-quarter reporting season, with close to 15 percent of the bellwether S&P 500 in the rearview.

Markets have been more taken with decidedly downbeat forward guidance however. Some of the world’s top firms have warned that the latent effects of past Fed tightening, ongoing trade wars and geopolitical jitters like US-Iran saber-rattling and Brexit uncertainty will translate into business cycle downturn.