The Bank of Canada: When Data Dependency Goes Awry 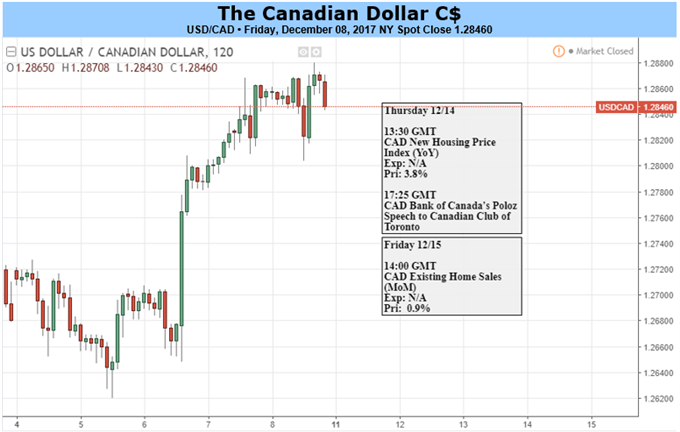 The past two weeks have brought some important news regarding the Canadian economy. Just last week, on Friday, we saw a batch of Canadian reports that all seemingly painted a positive picture. Third quarter GDP came out a bit-higher than was expected, at 1.7% versus 1.6%. The employment front appeared especially optimistic, as there were 79.5k jobs added in Canada in the month of November against the 10k that were expected; and the unemployment rate unexpectedly took a dive-lower as we saw a 5.9% print against a 6.2% expectation. All in all, there wasn’t really much to complain about, and this set up a fairly positive backdrop as we came into this week with a Bank of Canada rate decision on the docket for Wednesday.

The Bank of Canada had a change in tone earlier this year, when in May they began to talk up the possibility of rate hikes. This led to a move in July, and another in September. But after that second rate hike in September, the bank continued to say that future policy was data dependent, and would be based on how economic performance continued to show. When we got last Friday’s batch of positive items, this started to raise some eyebrows as to whether or not we might actually see a move at this week’s rate decision.

But what actually took place was far more puzzling than what many were expecting. The Bank of Canada did not hike rates, and that, in-and-of-itself, which wasn’t much of a surprise, as expectations had only moved-up towards 20% for an actual move on Wednesday. But – tonality towards future rate hikes became significantly muddier when the BoC appeared to contradict their very own statements. The statement accompanying the rate decision noted very strong employment and wage growth, just as we’d seen last week. But then later – the very same bank noted ‘ongoing –albeit diminishing slack in the labor market’ as a reason for not adjusting rates or warning that a rate hike may be on the way. If these statements sound contradictory to you, you’re not alone. This left many market participants flummoxed, and little additional clarity has been seen since.

The immediate reaction in the Canadian Dollar was one of weakness, and prices in USD/CAD made a fairly quick jump from a key support zone towards a key resistance area of the pair’s month-and-a-half old range. But what appears to be notable here is the Bank of Canada’s response to what has been a continued improvement in the very data points that they indicated would determine future policy moves. 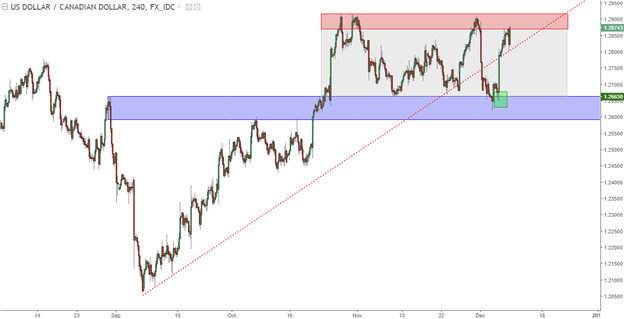 Reading between the lines – the Bank of Canada did not want to punch through a third rate hike this year, and they likely wanted to avoid the topic altogether while the debate around NAFTA continues to rage. If there is a reason for the Bank of Canada to be extremely cautious, that would be it; and using ‘slack in the labor market’ as an excuse could accomplish the goal of providing a reason for a dovish outlook while avoiding the inevitable political fire that may start should the Bank of Canada begin openly discussing NAFTA.

The net result is the deductive read that the Bank of Canada is likely going to remain dovish, at least in the near-term, until more of these fiscal issues gain some element of clarity. This also means that we could see a continuation of CAD-weakness, very much along the lines of what’s shown with varying degrees of prominence since just two days after that last rate hike.

Next week’s data is unlikely to bring much clarity to the situation, as there are no high-impact releases out of Canada. We do get housing data on Thursday (new homes) and Friday (existing homes), and each of these could help to highlight how consistently inflation is continuing to print in the Canadian economy. The predominant focus will likely center on Central Bank rate decisions in the United States, Europe and the U.K., and this can be an opportune time to read CAD price action in the effort to see how the theme of CAD weakness may further develop.

For next week, the fundamental forecast on the Canadian Dollar will be set to bearish.