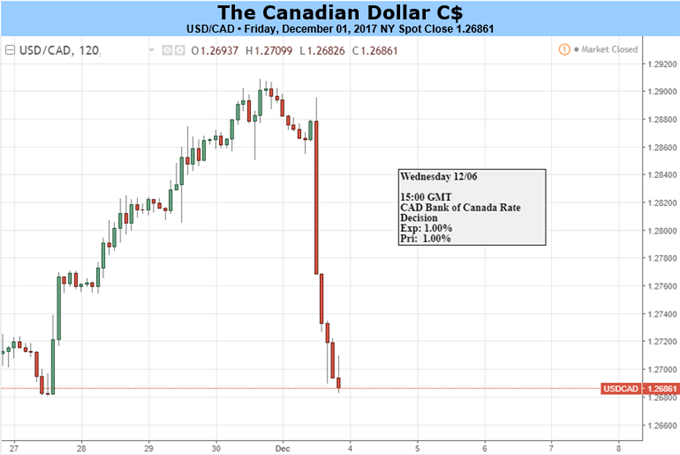 The Bank of Canada’s last interest rate decision for 2017 may spark further losses in USD/CAD should the central strike a hawkish outlook for monetary policy.

Even though the BoC is largely anticipated to keep the benchmark interest rate at 1.00% on December 6, Governor Stephen Poloz and Co. may prepare Canadian households and businesses for higher borrowing-costs as the economy adds another 79.5K jobs in November.

With the Unemployment Rate narrowing to an annualized 5.9%, the lowest reading since 2008, the BoC may emphasize that ‘less monetary policy stimulus will likely be required over time’ after delivering two consecutive rate-hikes in 2017. In turn, the central bank may follow a similar path in 2018 as ‘inflation is expected to increase to close to 2 per cent over the next several quarters,’ and USD/CAD may exhibit more bearish behavior going into 2018 as the positive developments coming out of the Canadian economy puts pressure on the BoC to further normalize monetary policy.

Keep in mind, the U.S. Non-Farm Payrolls (NFP) report may also impact the near-term outlook for USD/CAD, with employment projected increase 200K in November, while the gauge for Average Hourly Earnings is expected to rebound to an annualized 2.7% from 2.4% the month prior. However, another series of mixed U.S. data prints may curb the fuel the near-term weakness in USD/CAD as it encourages Federal Reserve officials to trim the longer-run forecast for the benchmark interest rate. 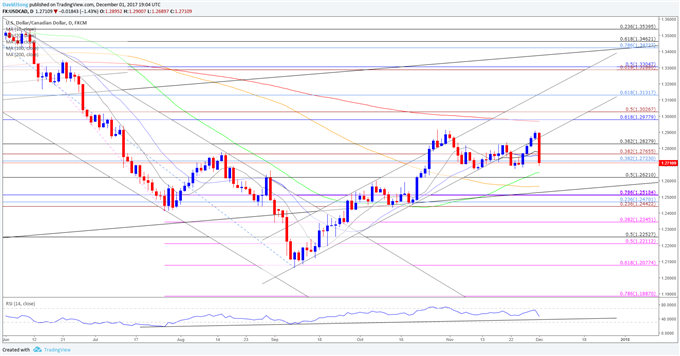 USD/CAD may consolidate ahead of the key event risks lined up for the first full week of December as it retains the range-bound price action carried over from the previous month, but the pair faces a growing risk of giving back the rebound from the 2017-low (1.2061) as a bear-flag appears to be taking shape, with the near-term outlook capped by the former-support zone around 1.2980 (61.8% retracement) to 1.3030 (50% expansion).

In light of recent price action, the Relative Strength Index (RSI) warrants attention as it pulls back ahead of overbought territory and approaches trendline support. Failure to retain the bullish formation from August may highlight a shift in USD/CAD behavior, with a break of the November-low (1.2670) opening up the 1.2620 (50% retracement) hurdle, which sits below the 50-Day SMA (1.2654).

Want to learn more about popular trading indicators and tools such as the RSI? Download and review the FREE DailyFX Advanced Trading Guides!