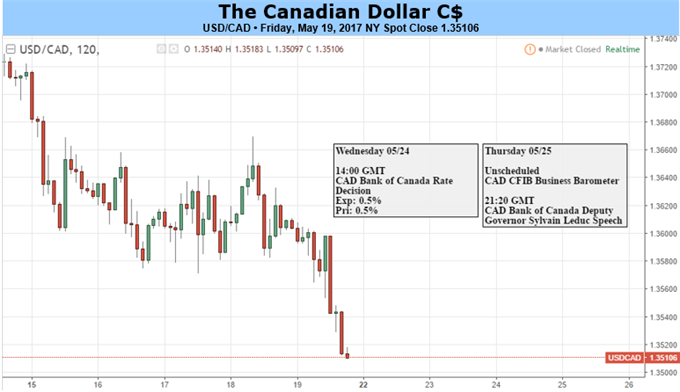 Canadian Dollar: Which Way Will the BoC Jump?

The Bank of Canada is on the horns of a dilemma. It’s still widely expected that the central bank’s next move will be an increase in its 0.50% key policy rate towards the end of this year but most of the recent evidence has pointed the other way – to a cut to 0.25%.

Admittedly, data last Wednesday showed that manufacturing sales values rose by a strong 1.0% m/m in March but then came news on Friday of a decline in core inflation, providing further evidence of disinflationary pressures in the economy. Spare capacity and very low wage pressures will likely keep core inflation below the 2% target mid-point in the coming months.

Moreover, while retail sales rose by considerably more than expected m/m in March, the “less autos” figure fell back by even more than in the month before. The combination of low inflation and falling retail sales outside the auto industry could well outweigh the signs elsewhere of strength and persuade the BoC to cut rates later in the year.

That, of course, would be negative for the Canadian dollar, which strengthened over the past week against its US cousin, largely on a higher oil price.

Naturally, the oil price will remain the other key driver of the currency, given the importance of oil to the Canadian economy. The price of West Texas Intermediate crude has risen from a low on May 4 around $44 per barrel to well above $50 now and any extension of that upward trend will likely lift the currency.

Moreover, IG Client Sentiment data show traders have remained netshort USDCAD since April 18, when it traded near 1.3324, and the price has moved 2.1% higher since then. We typically take a contrarian view to crowd sentiment, and the fact traders are netshort suggests USDCAD prices may continue to rise. However, recent changes in sentiment warn that the current USDCAD price trend may soon reverse lower despite the fact traders remain net short.

The evidence is therefore mixed: the rate outlook suggesting a weaker Canadian Dollar but the strength of the oil price and the sentiment data pointing the other way. The near-term outlook is therefore neutral.

What will drive the Canadian Dollar and all other currency majors in 2017’s second half? Check out the freeDailyFX Quarterly Forecasts