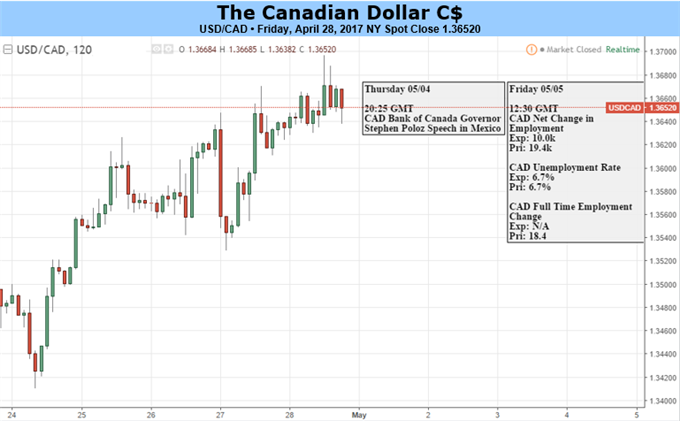 Have a question about trading the Canadian Dollar? Join a Q&A webinar and ask it live!

The Canadian dollar is the worst performing G10 currency in April, with USDCAD at its highest since February 22 2016.

The Loonie’s losses versus the US Dollar intensified earlier this week after new US tariffs of up to 24% on Canadian lumber imports were announced by the Trump administration. Its woes have been underpinned by weakening oil prices, which have been falling for the past two weeks.

Gross domestic product was flat year-on-year, matching forecasts. Month-on-month, GDP rose to 2.5% in February from 2.3% in January, which was below the 2.6% figure expected by analysts.

Stalling growth means the Bank of Canada, which was cautious about the economic outlook at its April 12 meeting, is unlikely to alter its current neutral stance on monetary policy. What’s more, Canada’s annual inflation rate cooled more than expected in March, pulling away from the central bank’s, underscoring the expectations that interest rates will stay put for some time.

Much of the weakness seen in CAD over recent sessions has been down to President Trump’s threat to withdraw from the NAFTA agreement. He’s since agreed not to terminate NAFTA at this stage, but indicated that he would move quickly to begin renegotiation, so CAD is likely to stay under pressure.

Next Friday brings us Canadian payrolls data for April. Canadian employment added 19.4k jobs in February, surpassing expectations and causing the CAD to edge higher. Before this, on Thursday, Bank of Canada Governor Stephen Poloz will be speaking in Mexico.