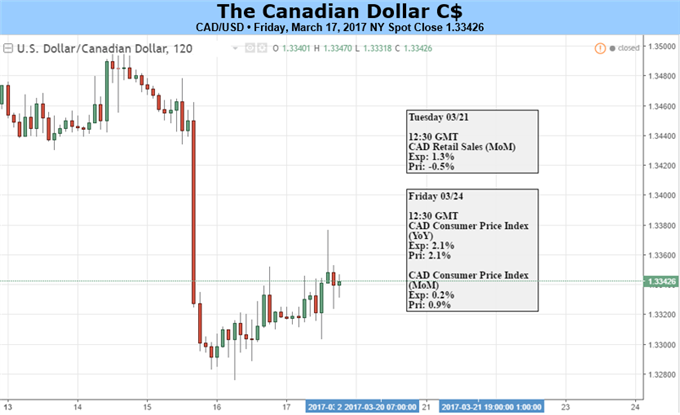 The past fortnight could have been a terrible one for the Canadian Dollar, with the price of benchmark West Texas Intermediate crude dropping from above $53 per barrel on March 7 to below $49 now. Yet over the same period the currency has actually appreciated modestly, with USDCAD dropping from around 1.34 to 1.3351 at the time of writing.

For sure, the Loonie was helped by the US Dollar’s drop as the Federal Reserve raised interest rates as expected but was more dovish in tone than many market participants had expected. Nonetheless, USDCAD had weakened for several sessions ahead of the Fed meeting and has made up little of the lost ground since.

As Canada is a major oil producer, its currency is closely correlated with the price of oil and it’s not impossible that the Organization of the Petroleum Exporting Countries will extend its oil output cuts beyond June this year to help prices recover in the face of a revival in crude production outside the group that has led to plentiful unused inventory. Saudi Energy Minister Khalid al-Falih said as much in an interview with Bloomberg on Thursday.

Meanwhile, the main economic event in Canada in the week ahead is the Federal budget but that is unlikely to include any major tax reforms or additional stimulus measures above and beyond thoseannounced in last year’s budget. The economy is growing at a respectable pace, with GDP expected to expand by around 1.8% annualized in the first quarter. Yet the Bank of Canada is unlikely to turn hawkish while the shadow of US President Donald Trump’s trade policies hang over it.

Economically, therefore, it’s steady as you go – and that’s likely to be true of the currency too.