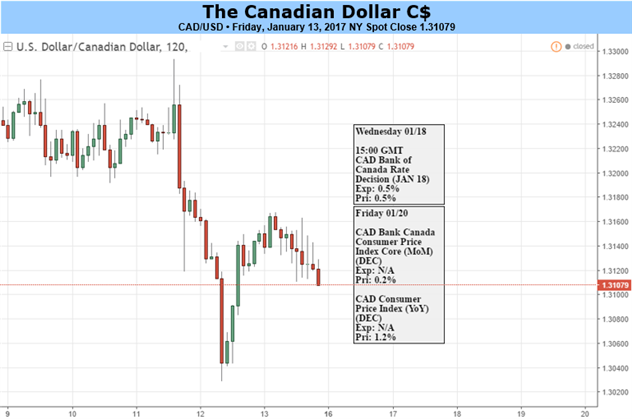 On Wednesday, Bank of Canada governor Stephen Poloz will announce what is anticipated to be no change in rates, but in a low rate environment, much of the focus appropriately turns to the Central Bank outlook. Given the sharp rise in the Yield Curve in everywhere except Japan, there is a focus on whether or not Poloz will be discussing the next action from the Bank of Canada as a hike down the economic road as opposed to a stimulus measure or a cut, which could further push the Canadian Dollar higher.

After Wednesday’s Bank of Canada meeting on Wednesday, we will have CPI in Canada on Friday, which, is anticipated to tick higher given the overall tick higher in commodities and borrowing costs. Two components worth keeping in mind as we come to an arguably important pivot point in the Canadian Dollar is its prior stability against the USD and the relative strength it currently enjoys alongside other commodity currencies.

Over the second half of 2016, USD/CAD moved higher by ~6.5%, which is a lot on an absolute basis, but little compared to other major moves lower against the USD as seen by GBP/USD, EUR/USD, and most notably, USD/JPY. These three pairs saw a move between 10-20% in favor of USD, which helps show on a relative basis that the Canadian Dollar had a hard time weakening thanks in part to rising Oil prices.

CAD currently sits as one of the strongest currencies in G10FX alongside AUD that is working on its third weekly advance and NZD with a ~2.5% weekly appreciation. Given the commodity dollar-bloc strength, it’s fair to think that the momentum could continue, which would likely translate further into both technical and fundamental favor likely leading to further CAD strength. Thursday’s USD/CAD move brought the lowest price since October, and the previously mentioned momentum would favor continuation without a USD/CAD close above Wednesday’s high of 1.3293.